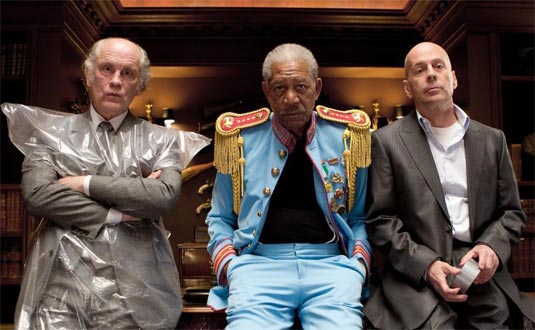 Today we have four new photos from Summit Entertainment’s Red, courtesy of Coming Soon. Based on the cult D.C. Comics graphic novels by Warren Ellis and Cully Hamner, Red is an explosive action-comedy starring Bruce Willis, Morgan Freeman, John Malkovich and Helen Mirren. Frank (Bruce Willis), Joe (Morgan Freeman), Marvin (John Malkovich) and Victoria (Helen Mirren) used to be the CIA’s top agents – but the secrets they know just made them the Agency’s top targets. Now framed for assassination, they must use all of their collective cunning, experience and teamwork to stay one step ahead of their deadly pursuers and stay alive. To stop the operation, the team embarks on an impossible, cross-country mission to break into the top-secret CIA headquarters, where they will uncover one of the biggest conspiracies and cover-ups in government history.