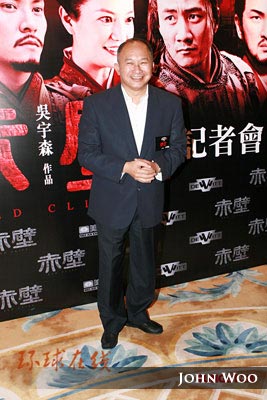 The costliest Chinese film seems to have the potential to be the most profitable as well. John Woo‘s “Red Cliff” opened on Thursday, attracting a full house at almost every theater screening the film. “Red Cliff”, reportedly Asia’s most expensive ever film, gained 27 million yuan (3.91 million U.S. dollars) of box office on its first-day release, setting the highest record among homemade movies. The first of this two-part epic motion, adapted from China’s classic historic fiction Romance of the Three Kingdoms, hit cinemas in Asia on July 10. Its first-day box office was the highest among all movies released in the mainland so far this year and higher than last year’s Hollywood blockbuster “Transformers” whose first-day box office was 22.41 million yuan. Despite its grand premiere last week, it was the first time the two-hour and 20-minute film was screened in its entirety. An audience member in Beijing told Sohu that she heard that John Woo had spent five years making “Red Cliff,” which aroused her curiosity in the film. Moviegoers were also impressed by the film’s magnificence, Sohu says. “Red Cliff” is based on a well-known historical battle in 208 AD in which thousands of ships were burnt. The biggest scenes involved 2,000 actors and crew members, and around 1,300 special effects are used, an earlier report on Shanghai Daily says. A few viewers on Thursday voiced disappointments that the lines spoken by these ancient characters were too modern, but Sohu found in a survey that generally speaking, the audiences gave the film a thumbs-up. The lengthy film also left some fans feeling exhausted, yet John Woo has done his best to cut it short. The current release is just half of the “Red Cliff” series. Woo said before that it’s very difficult to condense the story into two hours so he split it into two parts to allow more room for character development. The second part is set for release in Asia in December, when Western audience will also get to see a single, condensed release. The US$70 million “Red Cliff” is said to be the most expensive Chinese-language film ever made. Its star-heavy cast spans talents from Hong Kong, Taiwan and the mainland, including Tony Leung, Takeshi Kaneshiro, Lin Chi-ling, Zhao Wei and Hu Jun. [Via chinaview.cn ]
Continue Reading
Advertisement
You may also like...
Related Topics:john woo, Red Cliff