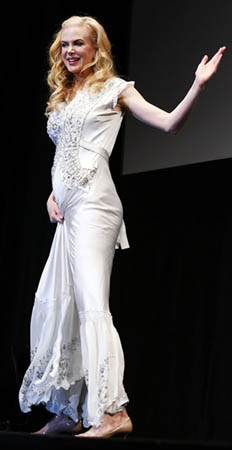 Nicole Kidman has asked fellow movie star George Clooney to be the godfather of her not yet born baby. Kidman is planning to have her baby baptized in the Catholic Church and thinks Clooney is the ideal godfather for the baby. A celebrity insider told, “Nicole asked George to be her baby’s godfather, and he has agreed.” No words just yet from both parties though. Kidman and Clooney were co-stars in the 1997 thriller-action movie “The Peacemaker“. And since that time they became close friends. Clooney once commented on Kidman’s pregnancy, saying she would be a “perfect” and “tall” mother. Kidman is carrying her first child with country singer husband Keith Urban. It will be her first biological child in addition to the two adopted children,  Connor Antony and Isabella Jane, she has with ex-husband Tom Cruise.
Continue Reading
Advertisement
You may also like...
Related Topics:George Clooney, Nicole Kidman