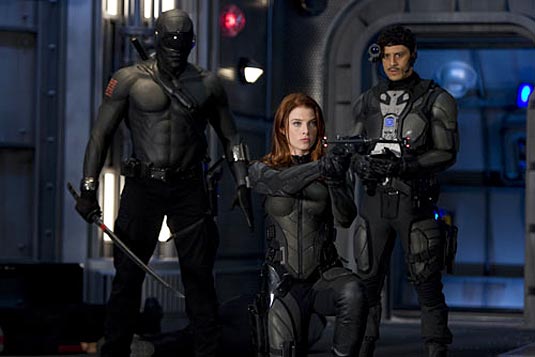 G.I. Joe: Rise of the Cobra is a lad’s fantasy, the high-tech, big budget cinematic equivalent of blowing up G.I. Joe dolls with M-80s in the backyard. And perhaps that’s as it should be. Since Paramount declined to screen the movie for the press ahead of time, like most critics I paid for a ticket and saw G.I. Joe with its intended audience — a bunch of guys between 20 and 35, with nothing better to do on a Friday afternoon than watch stuff go kaboom. From their enthusiastic response, I’d say that they got exactly what they paid for, and more. “The new action movie isn’t as bad as you think. It’s much, much worse… ‘G.I. Joe’ is like watching fireworks with a blindfold on: it’s deafening and you feel under attack. The story makes no sense-why does the Eiffel Tower topple over after being covered in sparkling slime? And worst of all: Sienna Miller and Channing Tatum, a charismatic guy whom the New York Times once compared to Marlon Brando, have the chemistry of two ice cubes…read more [NewsWeek] I feel no particular affection or nostalgia for the “G.I. Joe” brand-name. Yes, I’m well-aware that the toy hero has been around since well before my birth, that he’s had several resurgences over the years, and that he and his massive team of friends and foes were huge cartoon stars when I was growing up in the 1980s. Yet I’m neither a fan nor a hater of the property, and so I approached his latest incarnation, the big-budget live action* film G.I. Joe: The Rise of Cobra with no baggage whatsoever, aside from that “feelm critic” valise that is a permanent fixture inside my brain. My early verdict is this: Find the asterisked word in this paragraph, and that’s all you need to know…read more [Cinematical]

So the movie opens up in France in the late 17th century, when you learn of a Scottish man named Mac-something that doesn’t really matter. He sold weapons to the enemies, and he is branded a traitor, being forced to wear an iron mask. (Hmmm…) Then we get a title card, then another one that says “In the not too distant future”, which instantly made me think I was watching Mystery Science Theater 3000. Anyway, in this near future, the descendant of Mac-whatever (who’s played by the Doctor Who that was in 28 Days Later) has developed “nanotechnology” that fixes everything. Or destroys it. It’s a bunch of parasitic robots that eat through metal. These are attached to four warheads. The warheads are attacked, but GI Joe is there to save the day. The warheads are stolen again, GI Joe has to go out and get them. That’s the plot. No nonsense, cut and dry. Let the action playsets loose and have fun with them. And that’s all the movie really is: just an elaborate action playset, complete with not one, but TWO hidden bases. (One is underwater!!!) And a bunch of cool flying machines that fire the force or something. It really doesn’t matter, because it was a fun time that new it was silly and went along for the ride…read more [Movies Online] 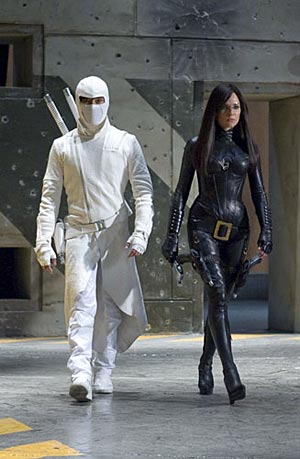 There are a couple of things that Sommers gets very right, and a few that he gets very wrong. Perhaps his smartest move was hiring fairly good actors for roles that don’t really require so much acting. Channing Tatum, Joseph Gordon Levitt, Christopher Eccleston, Jonathan Pryce, Dennis Quaid, Sienna Miller – these are actors who bring a certain amount of class and reality even to characters based on a toy line, and while none of them are in danger of being accused of serious thespianism in this film, they’re all having fun while keeping the film grounded in enjoyable characters…read more [CHUD] To err on the side of kindness, we might guess that the strategy of Sommers and his screenwriters was to ignore the prototype stage of a franchise launch – a vigorous introduction of the characters and motifs – and go directly to self-parody. We are told the main story takes place “In the not too distant future …” If that recalls the first line of the old Mystery Science Theater 3000 theme song, you will have brought the proper attitude to the movie: it hardly needs wisecracking robots, for it not only carries the seeds of its own destruction but hands them out like a Burpee’s salesman. An early scene, flashing back to 17th century France, plays like a lost Monty Python sketch. For its modern-day Paris scenes, the movie borrows some set pieces (including the blowing up of the Eiffel Tower) from Matt Stone and Trey Parker’s Team America: World Police, an action comedy performed by puppets, from whom the expressionless performers appear to have taken their acting cues…read more [Times] I’ll be honest, I don’t have the best track record with Mr. Sommers. I have not been a fan of any of the films in THE MUMMY series at all. Although I did have a little enjoyment when Brendan Fraser shows up in G.I. Joe for a cameo. But his films always felt sort of cold and just kind of bland to me, aside from DEEP RISING. But with this new flick based on a toy, his style seemed right at home, but it also has some of the same problems that The Mummy had. Of course I’m talking an overdose of CGI and hammy dialogue and acting. But again, this is based on a toy, if you expect more than that you are going to see the wrong film…read more [JoBlo]

Then there’s his propensity to overload a film with substandard visual effects. You’d have thought, maybe even hoped, that given a plot which involves human beings with guns rather than building-sized robots, he’d respect the Bond-influence he’s already cited and keep it practical and in-camera. Sadly not. A Parisian chase scene – yes, like Team America, these heroes trash the French capital – sees Duke and Ripcord leaping about in cyber-supersuits. The impression, appropriately, is that they’re being waved around by a giant invisible nine year-old. And the climactic undersea battle? You know Sommers wants us to think ‘Thunderball’. But the Bond movie this ugly mess most closely resembles is Die Another Day…read more [EMPIRE] Video: GI Joe Movie Review [youtube]http://www.youtube.com/watch?v=vGOH9NrKtKk[/youtube]
Continue Reading
Advertisement
You may also like...
Related Topics:Brendan Fraser, Channing Tatum, Dennis Quaid, G.I. Joe: Rise of Cobra, Sienna Miller