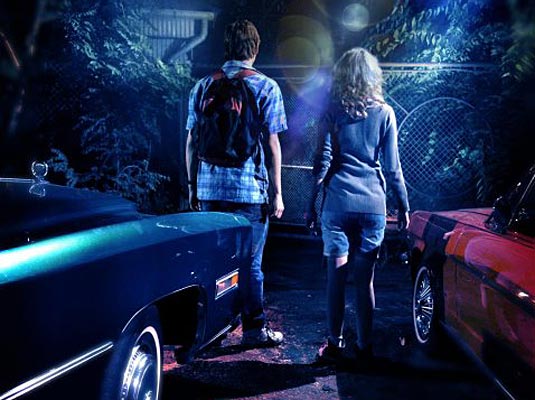 Today we have three trailers and five posters for Balázs Hatvani’s Gingerclown. It’s the very first Hungarian horror comedy, in fact the first Hungarian 3D movie. Tim Curry provides the vocal work for the titular villain. Additional cast include Brad Dourif, Lance Henriksen, Michael Winslow, and Sean Young. The film brings back some of the 80‟s”glam horror” ambient, thanks for the specifications of the script, the old fashioned dialogue technics and the classic aminatronic monsters, the movie is mixing the old-school film effects with the most modern stereoscopic 3D technology.

“1983: A group of high school students are having a great time near Hollywood Hills at the weekend when they bump into the Loser from their school, Sam, who’s just on his way home. Sam would do anything in order to get Jenny’s attention, one of prettiest girls in school. Unfortunately she’s also the girlfriend of the school’s bully, Biff, the quarterback of the football team. Biff and his buddies are keen to take Sam to the old abandoned amusement park to make him prove his courage as part of their initiation ceremony. They involve Jenny in their cruel game as the grand prize of the competition. Sam accepts the challenge, but the girl wouldn’t let him go in by himself; she follows him into the amusement park and a night they’ll never forget. Because in the old park, hidden in the darkness, are frightening and somewhat eccentric monsters who love to torture innocent human beings while intensively annoying each other.” Tim Curry (Rocky Horror Picture Show) voices “Gingerclown,” while Brad Dourif (Child’s Play) voices “Worm Creature,” Lance Henriksen (Aliens) as “Braineater,” Michael Winslow (Police Academy) as “Stomachcrumble,” and Sean Young (Blade Runner) as “Nelly the Spiderwoman.”

Gingerclown which is yet to have its official release date, is slated for 2012 release. Trailer #1 Trailer #2 Trailer #3
Continue Reading
Advertisement
You may also like...
Related Topics:Lance Henriksen