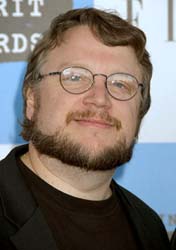 Empire caught up today with Guillermo del Toro and asked him for an update on the current situation with The Hobbit. Many sites have been reporting that his deal to direct is signed and sealed and just waiting for an end to the writers’ strike before it’s announced. But that’s not so, he says. “I wish it was definite, but it isn’t,” he told us. “It’s still in talks, there are still a lot of ‘T’s to cross and ‘I’s to dot. It’s certainly not certain yet…But, as far as I’m concerned, [if it was definite] I would be packed in ten seconds”. He’s not worried at this time about the lawsuit that was revealed earlier this week. “I heard that, but I’m quite zen about those things,” Del Toro continued. “Since that news broke, I have not exchanged a single phone call with my lawyer or my manager or anyone. They talk about it and I have received some emails, but, as far as I’m concerned, until I’m on board I should not worry about it. I read about it, but there’s nothing I can do about it. This week seems to be the lawsuit week in Hollywood”. He would love to bring back actors from “The Lord of the Rings” trilogy whose characters appear in the new films: “I’ve been pretty much incredibly open about the things that I love and don’t love in the past. I’ve turned down huge franchises in the past because there are parts of that world I don’t gel with. The reason I took Blade 2 is because I love the characters that Stephen Norrington created and the actors he used. That times ten is the reason why I’m interested in The Hobbit”
Continue Reading
Advertisement
You may also like...
Related Topics:Guillermo del Toro, The Hobbit, The Lord of the Rings

First Look: Prequel Gets Its Claws Into ‘Wolverine’
‘Vantage Point’ On February 22
Advertisement