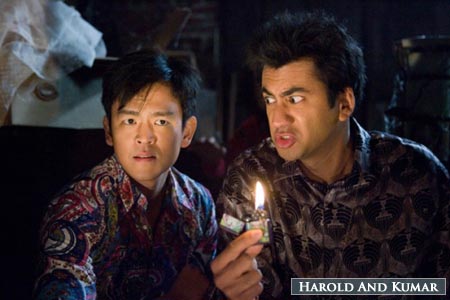 Harold and Kumar are heading back to the screen for a third outing with Jon Hurwitz and Hayden Schlossberg working behind the cameras again.
Variety reports the duo (who wrote “Harold & Kumar Go to White Castle” and “Harold & Kumar Escape From Guantanamo Bay“) will return to write and direct the third installment for Mandate Pictures. The film will also have Greg Shapiro return as a producer. Stars John Cho and Kal Penn are expected to reprise their roles as the ganja-loving duo because Mandate has options on the actors for the third installment. New Line, which was folded into Warner Bros in February, distributed the first two films. Warners will likely distribute the third “Harold and Kumar.” The first Harold and Kumar pulled in $18 million domestically at the box office in 2004, but went on to earn more than $30 million in DVD sales. The sequel cost $12 million to make, and took in $38 million at the box office. It hits DVD on Tuesday, July 29th.
Continue Reading
Advertisement
You may also like...
Related Topics: