The great new trailer for the romantic comedy “He’s Just Not That Into You,” based on the best-selling book by Greg Behrendt and Liz Tuccillo, is online. New poster has also been released. From director Ken Kwapis, the movie has great cast – Ben Affleck, Jennifer Aniston, Drew Barrymore, Jennifer Connelly, Kevin Connolly, Bradley Cooper, Ginnifer Goodwin, Scarlett Johansson and Justin Long. [flv]http://cache02-videos02.myspacecdn.com/88/vid_919612d540dc49ca900da15a0fedeaa6.flv[/flv] The Baltimore-set movie of interconnecting story arcs deals with the challenges of reading or misreading human behavior. How to find true love when everyone hides the truth? The movie follows a group of women in their twenties and thirties who try to figure out the answers to that question. Jennifer Connelly plays a woman stuck in a tired marriage with Cooper’s character. Kevin Connolly, meanwhile, is a man pining after a woman, who is having an affair with Cooper. Drew Barrymore plays a woman perpetually confused by dating, now more than ever in a culture that is more obsessed with technology than actual human contact. 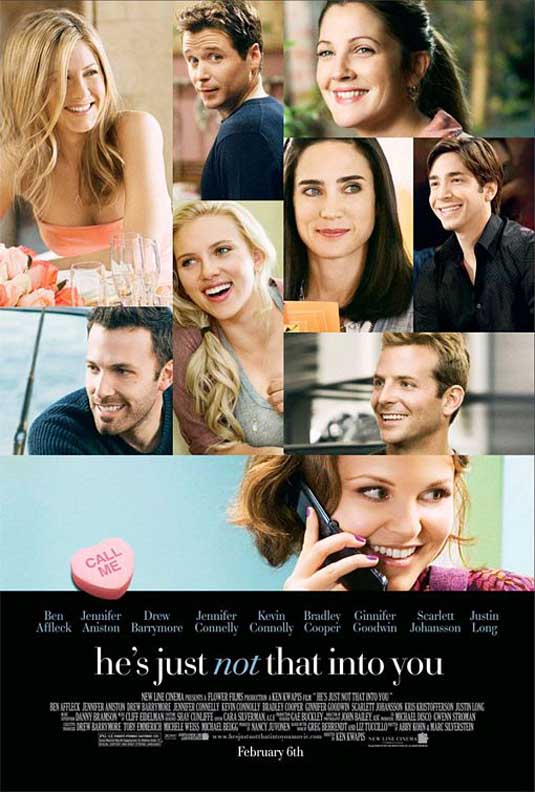 “He’s Just Not That Into You” will hit the theaters on February 6, 2009.
Continue Reading
Advertisement
You may also like...
Related Topics:Ben Affleck, Drew Barrymore, Jennifer Aniston, ken kwapis, Scarlett Johansson