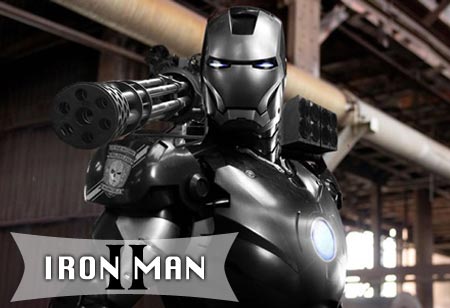 In an interview with Military.com, Terrence Howard talks about playing Tony Stark‘s military liaison in ‘Iron Man 2‘. “Iron Man 2” is scheduled to begin filming in March 2009. Most of the main actors, including Robert Downey Jr., Gwyneth Paltrow and Terrence Howard, are expected to reprise their roles in the sequel. Meanwhile, the main character of the Marvel adaptation movie, Tony Stark who becomes known as Iron Man when he suits up in his armored steel suit, will be seen making a cameo appearance in the highly anticipated action movie “The Incredible Hulk” which hits the big screen on Friday, June 13. “Iron Man 2” is currently scheduled for an April 2010 release from Marvel Studios. Calling Howard’s proposed starting date and a release date of April 2010 a tad “unrealistic,” Favreau states in his online blog:

“I am concerned, however, about the announced release date of April 2010,” Favreau wrote. “Neither Robert [Robert Downey Jr.] nor I were consulted about this and we are both concerned about how realistic the date is in light of the fact that we have no script, story or even writers hired yet.”

What the famous actor-turned-director does sees as realistic is a three year gap between each new Iron Man film. Of course that means that Downey Jr. would be well into his 50’s by the time the third film roles around. Then again, Harrison Ford proved in Indy 4 that age needn’t be an obstacle.

“This genre of movie is best when it is done thoughtfully and with plenty of preparation,” Favreau continued. “It is difficult because there are no Marvel ‘09 releases and they need product, but I also think we owe it to the fans to have a great version of [for the next film] and, at this point, we would have less time to make it than the first one.”

The first film, which opened on April 30 was a box office bonanza for Marvel, garnering more than $288 million to date.
Continue Reading
Advertisement
You may also like...
Related Topics: