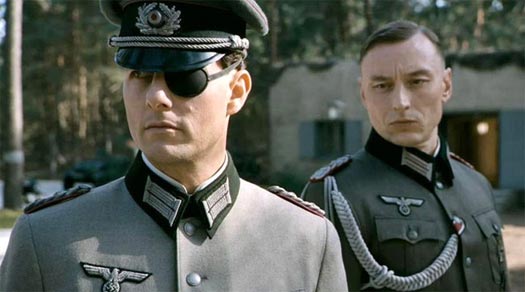 Variety Video has the updated trailer for “Valkyrie“. The MGM/United Artists docudrama casts Tom Cruise as the leader of a historic plot to assassinate Hitler. Acclaimed director Bryan Singer moves away from the worlds of Marvel and DC to helm this World War II thriller. Severely wounded in combat, Colonel Claus von Stauffenberg returns from Africa to join the German Resistance and help create Operation Valkyrie, the complex plan that will allow a shadow government to replace Hitler’s once he is dead. But fate and circumstance conspire to thrust Stauffenberg from one of many in the plot to a double-edged central role. Not only must he lead the coup and seize contrl of his nation’s government… He must kill Hitler himself. Singer’s talented cast also includes Kenneth Branagh, Bill Nighy, Tom Wilkinson, Eddie Izzard, and Terrence Stamp. “Valkyrie” was pushed to 2009 under an avalanche of bad buzz, including Cruise’s Scientology conflict with the German government and his very American performance in an entirely bratwurst-und-schnitzel setting.
Continue Reading
Advertisement
You may also like...
Related Topics:Valkyrie