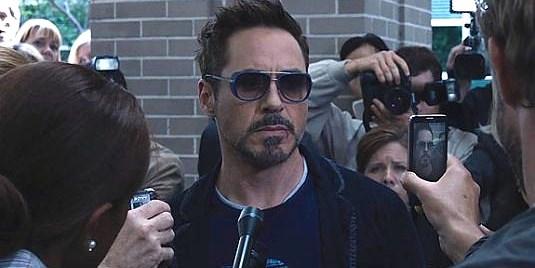 Yesterday we had The Mandarin’s nationality TV spot, earlier today you had a chance to check out another extended TV spot for Iron Man 3, and now we finally have the first clip to share! Head inside to hear what Tony Stark has to say, ’cause it’s time for some good old fashioned revenge… Shane Black‘s movie is set to open on May 3rd, 2013, and as you already know the movie stars Robert Downey Jr., Gwyneth Paltrow, Don Cheadle, Guy Pearce, Rebecca Hall, Stephanie Szostak, James Badge Dale, Jon Favreau, Ben Kingsley and Wang Xuequi. As you already know, Marvel Studios‘ action adventure pits brash-but-brilliant industrialist Tony Stark aka Iron Man against an enemy whose reach knows no bounds.

When Stark finds his personal world destroyed at his enemy’s hands, he embarks on a harrowing quest to find those responsible. This journey, at every turn, will test his mettle. With his back against the wall, Stark is left to survive by his own devices, relying on his ingenuity and instincts to protect those closest to him. As he fights his way back, Stark discovers the answer to the question that has secretly haunted him: does the man make the suit or does the suit make the man?

Let us know what you think about this clip & stay tuned for more updates!