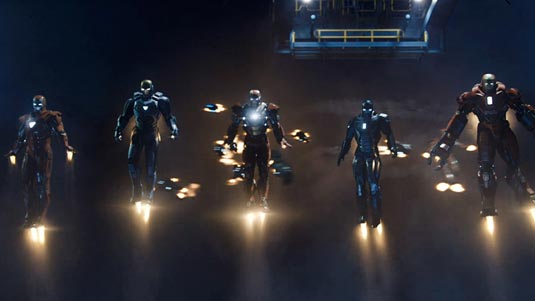 Lookey, lookey, meesa, we have two more Iron Man 3 spots for you! (oh don’t mind me, I’m somewhat starwars-y mushy today, must be that time of the month) The first one is officially titled “Not Enough” while the other has no name (or at least I haven’t come across it), and they both show even more new footage. Which is understandable – with their point being to entice us enough so we’d burst into movie theaters once the film opens (like we need that, right?). Anyway, check them out below: “Not Enough” Synopsis:

Marvel Studios’ “Iron Man 3″ pits brash-but-brilliant industrialist Tony Stark/Iron Man against an enemy whose reach knows no bounds. When Stark finds his personal world destroyed at his enemy’s hands, he embarks on a harrowing quest to find those responsible. This journey, at every turn, will test his mettle. With his back against the wall, Stark is left to survive by his own devices, relying on his ingenuity and instincts to protect those closest to him. As he fights his way back, Stark discovers the answer to the question that has secretly haunted him: does the man make the suit or does the suit make the man?