Connect with us
Isaiah Mustafa, whether you know him as Former NFL player, or guy from Old Spice commercial, it doesn’t really matter. 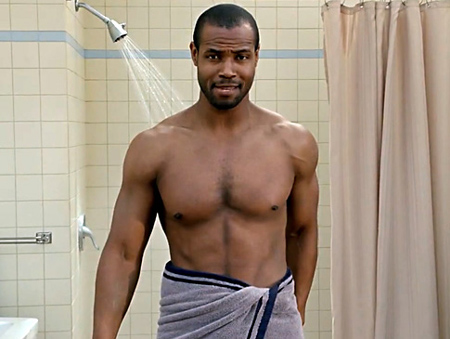 What’s important now is the fact that he has landed role in the upcoming Seth Gordon‘s comedy Horrible Bosses. And he is definitely in a great company, because, let us remind you that this project already stars Jennifer Aniston, Jason Bateman, Jamie Foxx, Kevin Spacey, Colin Farrell, Donald Sutherland, Julie Bowen, Jason Sudeikis and Charlie Day. A dark, in-the-workplace comedy follows three friends who conspire to kill their bosses. Frustrated by their jobs are Jason Sudeikis, Jason Bateman and Charlie Day. Jennifer Aniston and Colin Farrell are two of the offending office tyrants, while Jamie Foxx is a colorfully named scam artist who dishes killing advice to the three regular guys. Kevin Spacey will have an honor to play the worst of the bosses, or, as they describe him “a master manipulator with an attractive wife (Bowen).” So, Isaiah Mustafa joins this cast and the only thing we know is that he will play a cop. Here’s what he says about it: “It’s a smaller role, but who wouldn’t want to be in one of these funny, irreverent comedies? The cast is great. I’m playing a cop because I play these authoritative characters well. I don’t know exactly who I’m in the scene with – maybe JenniferAniston.” Lucky man! Let us also add that Mustafa will be appearing in a guest spot on NBC’s Chuckand Tyler Perry’s “For Colored Girls Who Have Considered Suicide When Rainbow is Enuf” as well. Busy man, or what? Horrible Bosses is currently set for a July 29th, 2011 release.
Continue Reading
Advertisement
You may also like...
Related Topics:Charlie Day, Colin Farrell, Donald Sutherland, Horrible Bosses, Isaiah Mustafa, Jamie Foxx, Jason Bateman, jason sudeikis, Jennifer Aniston, Kevin Spacey, Seth Gordon