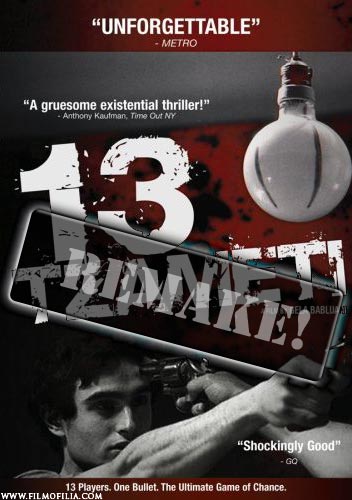 Mickey Rourke, Jason Statham and 50 Cent have signed on to star opposite Sam Riley in “13“, director Gela Babluani‘s remake of his French-language film “13 Tzameti“, reports Variety. Sam Riley, 50 Cent, Rourke and Statham will star in the story of a man who steals a mysterious package and gets sucked into an underground gambling ring. The 2005 film was the feature directorial debut of Géla Babluani. Twenty-two-year-old Sebastien leads an impoverished life with his immigrant family constantly struggling to support them. While repairing the roof of a neighbor’s house, he overhears a conversation about an expected package that promises to make the household rich. Sensing the opportunity of a lifetime, Sebastien intercepts the package containing a series of specific instructions. Following the clues, he assumes a false identity and manages to slip through the grasp of the enclosing police as he ventures deeper and deeper into the countryside. The closer he gets to his destination and the more people he meets along the way, the less he understands about what he is looking for. Ultimately, he comes face to face with a ring of clandestine gamblers placing bets on the outcome of a multi-player, high stakes tournament of Russian roulette. The original won the 2006 Sundance Grand Jury Prize and Babluani won best director at the Venice Film Festival. “13” will be produced by Rick Schwartz of Overnight Productions, Aaron Kaufman of Barbarian Films and Valerio Morabito of the Morabito Picture Company. The film will begin shooting on November 17th in and around New York City. Original “13 Tzameti” trailer
Continue Reading
Advertisement
You may also like...
Related Topics:13, 50 Cent, Jason Statham, Mickey Rourke, Sam Riley