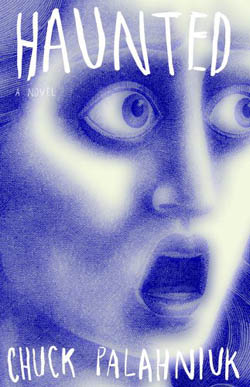 Chuck Palahniuk, author of nine novels, is popular with Hollywood filmmakers. His books “Fight Club” and “Choke” have been turned into movies, while “Invisible Monsters” and “Survivor” are in development. Another Chuck Palahniuk book is set for the big screen treatment. According to Variety, New School Media has optioned the rights to Pahlaniuk’s 2005 novel, “Haunted.” Koen Mortier will adapt the novel and direct. The novel centers on a group of writers who gather for a writers retreat, only to be locked in a dungy old theater and as the characters start to die off, the survivors all vie to be the last one standing. “Haunted” takes the form of 23 short stories, each introduced by a poem identifying the purported writer of the story that then follows. These are linked by short pieces of narrative. Although superficially it might appear to be a fix-up (a collection of individual stories welded together in an attempt to make them seem like a novel), in fact the stories in this case are the novel. At least one of the stories can be seen as a stand-alone work, but none the less this is a unitary novel of exceptional originality.
Continue Reading
Advertisement
You may also like...
Related Topics: