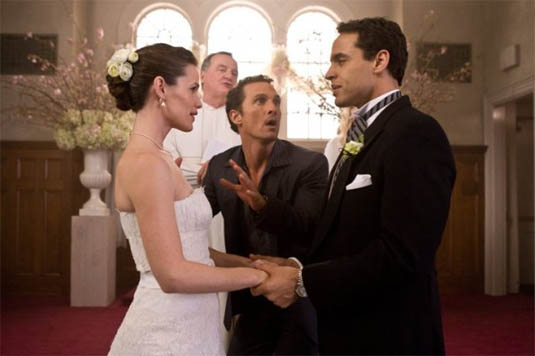 A trailer for “The Ghosts of Girlfriends Past” directed by Mark Waters from a script by Jon Lucas and Scott Moore has been released. Connor Mead (McConaughey) is celebrity photographer who loves freedom, fun and women…in that order. A committed bachelor who thinks nothing of breaking up with multiple women on a conference call, Connor’s mockery of romance proves a real buzz-kill for his kid brother, Paul, and a houseful of well wishers on the eve of Paul’s wedding. Just when it looks like Connor may single-handedly ruin the wedding, he is visited by the ghosts of his former jilted girlfriends, who take him on a revealing and hilarious odyssey through his failed relationships – past, present and future. Together they attempt to find out what turned Connor into such an insensitive jerk and whether there is still hope for him to find true love…or if he really is the lost cause everyone thinks he is. “The Ghosts of Girlfriends Past” which stars Matthew McConaughey, Jennifer Garner, Michael Douglas, Lacey Chabert, Emma Stone, Christina Milian, Noureen DeWulf and Amanda Walsh will hit the theaters on May 1, 2009.
Continue Reading
Advertisement
You may also like...
Related Topics:Jennifer Garner, Matthew McConaughey, Michael Douglas, The Ghosts of Girlfriends Past