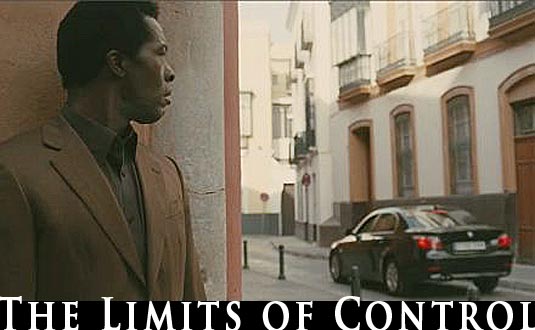 Focus Features has just released the trailer for their upcoming dramatic thriller “The Limits of Control,” the latest flick from indie filmmaker Jim Jarmusch. The Limits of Control is set in the striking and varied landscapes of contemporary Spain (both urban and otherwise). The location shoot there united the writer/director with acclaimed cinematographer Christopher Doyle (In the Mood for Love, Paranoid Park). Isaach De Bankolé stars in the lead role for Mr. Jarmusch; this marks the duo’s fourth collaboration over nearly two decades, following Night on Earth, Ghost Dog: The Way of the Samurai, and Coffee and Cigarettes. “The Limits of Control” also features several other actors with whom Mr. Jarmusch has previously worked, including Alex Descas, John Hurt, Youki Kudoh, Bill Murray, and Tilda Swinton; and actors new to his films, including Hiam Abbass, Gael García Bernal, Paz De La Huerta, Jean-François Stévenin, and Luis Tosar. The Limits of Control is the story of a mysterious loner (played by Mr. De Bankolé), a stranger, whose activities remain meticulously outside the law. He is in the process of completing a job, yet he trusts no one, and his objectives are not initially divulged. His journey, paradoxically both intently focused and dreamlike, takes him not only across Spain but also through his own consciousness. “The Limits of Control” goes into limited release on May 22nd.
Continue Reading
Advertisement
You may also like...
Related Topics:Bill Murray, hiam abbass, Isaach De Bankolé, Jim Jarmusch, John Hurt, Paz De La Huerta, The Limits of Control, Tilda Swinton