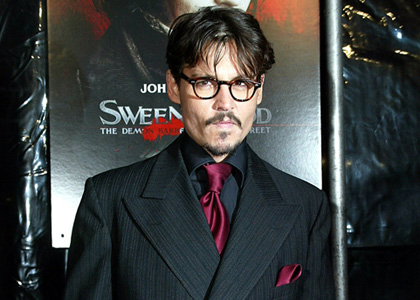 Johnny Depp was at the New York (Zeigfeld Theatre) premiere of his new movie “Sweeney Todd: The Demon Barber of Fleet Street” Based on the 19th century legend of Sweeney Todd and the hit Broadway musical with music and lyrics by Stephen Sondheim, Sweeney Todd a.k.a Benjamin Barker (Johnny Depp) returns to London after being sent away by Judge Turpin with the help of a sailor, Anthony Hope. He opens a barber shop above Mrs. Lovett’s (Helena Bonham Carter) Meat Pie Shop were she sells “the worst pies in London.” With the help of Mrs. Lovett, Todd tries to rid of all the people who have ever done him wrong and hopes to be reunited with his daughter, Joanna, who is now Judge Turpin’s ward. [youtube]http://www.youtube.com/watch?v=MTo0qvNURmo[/youtube] Johnny Depp singing in ”Sweeney Todd”

In “Sweeney Todd” Johnny teamed up, once again, with Tim Burton. Despite their frequent collaboration, Burton says this is the first time he’s heard Depp sing. Tim told press, “He did surprise me. It was better than I thought so that is always an exciting surprise.” Meanwhile, Johnny Depp told press his role in “Sweeney Todd” was therapeutic. “With every character you play there is some opportunity for therapy in a sense. There is exploration to some degree, exorcism in a way.”
Continue Reading
Advertisement
You may also like...
Related Topics:Helena Bonham Carter, Johnny Depp, Sweeney Todd