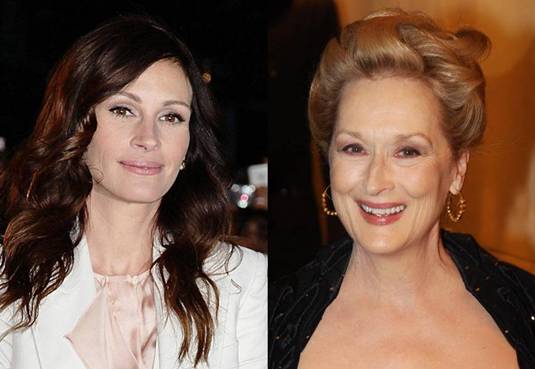 Glad to hear that the long-gestating feature adaptation of the Pulitzer/Tony-winning play August: Osage County has officially attached Julia Roberts and Meryl Streep. The two Oscar-winning actresses have signed on to appear on-screen together for the first time for the film which will be directed by The Company Men helmer John Wells. Streep would take the part of drug-addicted matriarch Violet Weston, while Roberts would play her eldest daughter Barbara, whose estranged husband has had an affair with one of his students. The story follows the strong-willed women of the Weston family, whose lives have diverged until a family crisis brings them back to the Midwest house they grew up in, and to the dysfunctional woman who raised them. A press release from the Weinstein Company quotes Roberts saying:

After seeing Meryl Streep’s mesmerizing portrayal as Margaret Thatcher in The Iron Lady, it has me even more excited and proud to costar with her.

I’m delighted and feel very privileged to have the opportunity to direct Meryl and Julia in this magnificent piece written by Tracy Letts. Meryl’s extraordinary body of work made her the only conceivable choice to play Violet. Coupled with Julia’s effortless mastery of every role she undertakes and her fearlessness as an actress, I’m confident this first ever collaboration with Meryl and Julia will produce an exciting and moving film.

No release date has been given for the film, but principal photography has been set to shoot this fall for an autumn 2013 possibly release. I’m sure you already know that Streep, who recently won the BAFTA for best actress is favorite to win her third Oscar, while Roberts will next be seen as the evil queen in Tarsem Singh’s Mirror Mirror.
Continue Reading
Advertisement
You may also like...
Related Topics:August: Osage County, John Wells, Julia Roberts, Meryl Streep