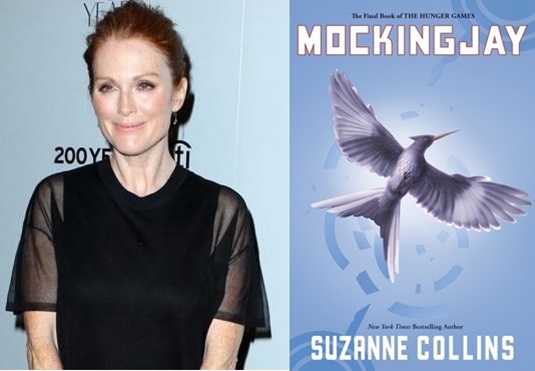 Today Lionsage has confirmed that the Oscar nominated Julianne Moore’s deal has closed and she’ll indeed be portraying President Alma Coin in Francis Lawrence’s two-part adaptation of The Hunger Games: Mockingjay. Carrie actress will join the returning cast from the second installment in the series The Hunger Games: Catching Fire, which hits theaters this November, and other new recruits Natalie Dormer as Cressida, Evan Ross as Messalla, and Stef Dawson as Annie Cresta. Mockingjay Part 1 is set to open November 21st, 2014, and the trilogy will come to an end on November 20th, 2015, when Part 2 tops off the action. Here’s a bit spoilerish press release:

SANTA MONICA, CA September 13, 2013 – Lionsgate (NYSE: LGF) announced today that four-time Academy Award® nominee Julianne Moore (BOOGIE NIGHTS, THE HOURS, THE END OF THE AFFAIR and FAR FROM HEAVEN) has joined the cast of THE HUNGER GAMES: MOCKINGJAY PARTS 1 & 2 as President Alma Coin, the leader of the rebellion against the Capitol. Moore will star opposite Academy Award winner Jennifer Lawrence, Josh Hutcherson and Liam Hemsworth in the third and fourth installments of the global blockbuster HUNGER GAMES franchise, slated for release in November 2014 and November 2015, respectively. She will join new cast members including Natalie Dormer, Stef Dawson and Evan Ross. In addition to her four Oscar-nominated roles, Moore has previously starred in CRAZY STUPID LOVE, THE KIDS ARE ALL RIGHT, CHILDREN OF MEN and last year’s HBO political drama film GAME CHANGE, which netted her an Emmy®, Golden Globe® and SAG Award®. She will next be seen in DON JON, SEVENTH SON and CARRIE. Moore is represented by CAA and Management 360. About THE HUNGER GAMES: MOCKINGJAY PARTS 1 & 2 Directed by Francis Lawrence and based on the novel “Mockingjay” by Suzanne Collins, THE HUNGER GAMES: MOCKINGJAY PARTS 1 & 2 make up the third and fourth installments of heroine Katniss Everdeen’s (Jennifer Lawrence) journey as she leads the districts of Panem in a rebellion against the tyrannical and corrupt Capitol. As the war that will determine the fate of Panem escalates, Katniss must decipher for herself who she can trust and what needs to be done, with everything she cares for in the balance. The blockbuster first installment of THE HUNGER GAMES franchise is the 14th highest-grossing North American release of all time and grossed nearly $700 million at the worldwide box office. The second film, THE HUNGER GAMES: CATCHING FIRE, opens worldwide on November 22, 2013. THE HUNGER GAMES: MOCKINGJAY – PART 1 will be released worldwide on November 21, 2014 and THE HUNGER GAMES: MOCKINGJAY – PART 2 opens November 20, 2015.