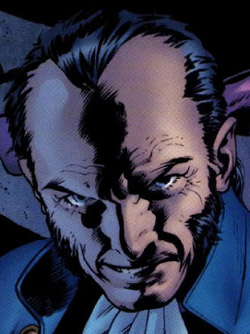 Kevin Bacon is now officially the “villain” member of the X-Men: First Class cast, only this time there we have a new rumor!

Previously mentioned role of Mister Sinister is no longer in the game and looks that Bacon will play Sebastian Shaw in the upcoming Matthew Vaughn’s movie.

“Sebastian Shaw possesses the ability possesses the ability to absorb kinetic energy and transform it into raw strength. He is the leader of the New York branch of the Hellfire Club, an exclusive secret society bent on world domination, although to the public, he is a legitimate businessman and ordinary human.

Shaw absorbs the energy of any blow he is struck by, not just punches, but bullets, and to a less successful degree, concussive energy beams, notably Cyclops’ optic blasts.

He is capable of absorbing the cutting, piercing and thrusting energy from a blade which makes it exceedingly difficult to cut or stab him with sharp edged weapons.

Without absorbing energy he is merely a strong ordinary human, but normally Shaw works to keep his strength at a superhuman level.”