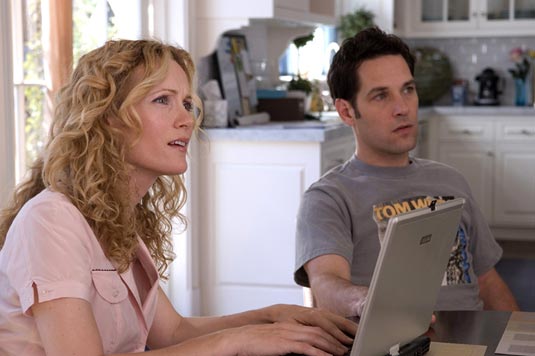 Judd Apatow is a busy guy, but it looks that he really enjoys working with some familiar characters. So no wonder we already learned that he’s in charge for both writing and directing a new movie that will be based on characters played by Leslie Mann and Paul Rudd in Knocked Up.

As you know the movie is scheduled for release June 1, 2012, so consider this new feature as some kind of a spin-off (if we could even call it that way).

So, since we have this kind of messy-update, let’s clear things out and see what Apatow had to say about the whole thing in an interview with Screen Junkies. First of all, writer/director explained that “his episodic background in television is why he’s so fond of telling different stories with the same characters, adding that we’ll definitely be seeing other characters from the original ‘Knocked Up’ world when the film hits theaters on June 1, 2012.”

Then, he said: “People were really taken by those characters. I think people really emotionally connected to the challenges of their marriage and I thought, you know, they were only a small portion of the movie.

When asked which characters from ‘Knocked Up’ we might see in addition to Pete and Debbie, Apatow says a lot of it depends on scheduling: “I’m trying to figure out how to do that. A lot of it just depends on people’s availabilities and the story I’m trying to tell, who fits into that story. There definitely will be other people from Knocked Up in the movie.”

So, as you see, there’s still a lot to be worked out, but Apatow does promise that Pete and Debbie will be joined by at least a couple of their Knocked Up friends. And that sounds pretty good, don’t you think?