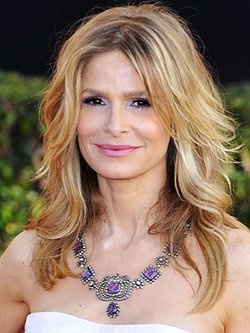 Man on a Ledge is the upcoming thriller that begins when an ex-cop threatens to jump to his death from a Manhattan hotel rooftop. We already know that Sam Worthington is set to play the cop and that principal photography has already begun in New York City. But the news is that Kyra Sedgwick will join Man on a Ledge cast as the latest addition to the thriller. Sedgwick will join the great cast: Elizabeth Banks, Anthony Mackie, Jamie Bell, Ed Harris, Edward Burns and newcomer Genesis Rodriguez. Nick Cassidy (Sam Worthington) was an honest cop. Now he’s in prison for a crime he didn’t commit. Desperate, he seizes the first chance to escape. Hours later, he is freshly shaven in an expensive suit, standing on a window ledge high above New York City. As a crowd gathers below, police cordon off the area and agree to Nick’s request to speak with pretty police negotiator Lydia Anderson (Elizabeth Banks). But Lydia doesn’t know that she is part of his grand plan, a plan that could give them both a second chance. Speaking quietly into a lapel microphone, Nick coordinates the high-tech theft of a $30 million diamond-the same diamond he was convicted of stealing. It’s the only way he can prove his innocence, but he needs Lydia’s help-and he’s running out of time. When his identity is exposed, a SWAT team positions itself on the roof, read to take him out. Lydia isn’t sure he’s telling the truth, but if he really was set up for the diamond heist, it had to be an inside job, which means at least one of the cops on the scene wants Nick dead. With SWAT about to move, cops destroying the evidence that could save him and nowhere to go but down, Nick’s chances of survival are getting slimmer by the minute. Filled with clever twists, Man on a Ledge is a smart, pulse-pounding thriller about a man determined to clear his name, exact revenge and get the girl…if he can just stay one step ahead of the men who put him behind bars. Man on a Ledge, directed by Asger Leth from an original screenplay written by Pablo F. Fenjves and Erich Hoeber & Jon Hoeber opens in early 2012.
Continue Reading
Advertisement
You may also like...
Related Topics:Asger Leth, Ed Harris, Edward Burns, Elizabeth Banks, Jamie Bell, Kyra Sedgwick, Man on a Ledge, Sam Worthington