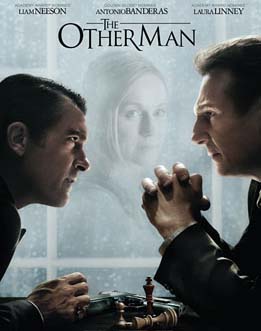 “The Other Man” based on Bernhard Schlink‘s short story about adultery stars Liam Neeson, Antonio Banderas, Laura Linney and Romola Garai. The trailer for the drama has hit the web. Check it out below. The movie which had its premiere at last year’s Toronto Film Festival is both written and directed by Richard Eyre (“Notes on a Scandal,” “Iris,” “Stage Beauty”). The script was adapted by Eyre and Charles Wood. “The Other Man” tells the story of Peter (Liam Neeson) who discovers that his wife Lisa (Laura Linney) has been receiving emails and mobile messages from Ralph (Antonio Banderas), a man he never knew existed. Peter’s obsession with this unknown rival escalates and, against the advice of his daughter Abigail (Romola Garai), a hurt and vengeful Peter flies to Milan to seek out the mysterious Ralph and the truth about his relationship with Lisa. “The Other Man” hits theaters in limited release on September 25th, 2009.
Continue Reading
Advertisement
You may also like...
Related Topics:Antonio Banderas, Laura Linney, Liam Neeson