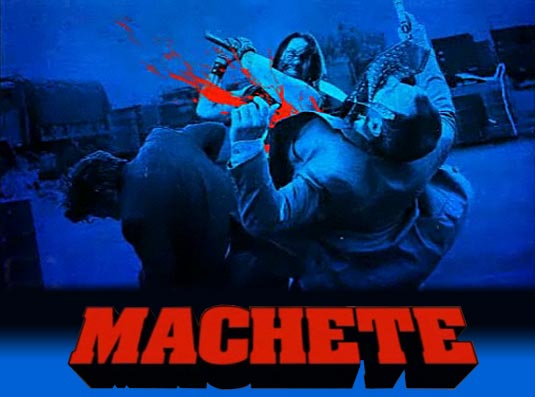 The movie is based on the “fake” trailer in Rodriguez’s 2007 Grindhouse. Machete is a Mexican ex-Federale with a gift for wielding a blade, who hides out as a day laborer, who is double-crossed by a corrupt state senator. The feature version of the trailer finds Machete (Danny Trejo) a renegade former Mexican Federale, roaming the streets of Texas after a shakedown from drug lord Torrez (Steven Seagal).

Reluctantly, Machete takes an offer from spin doctor Benz (Jeff Fahey) to assassinate McLaughlin (Robert De Niro) a corrupt Senator. Double crossed and on the run Machete braves the odds with the help of Luz (Michelle Rodriguez), a saucy taco slinger, Padre (Cheech Marin) his “holy” brother, and April (Lindsay Lohan) a socialite with a penchant for guns. All while being tracked by Sartana (Jessica Alba), a sexy ICE agent with a special interest in the blade slinger.

20th Century Fox won the bidding war for the rights to Machete and will release the film in theaters on September 5th, 2010.

What do you think of the first trailer for Machete?