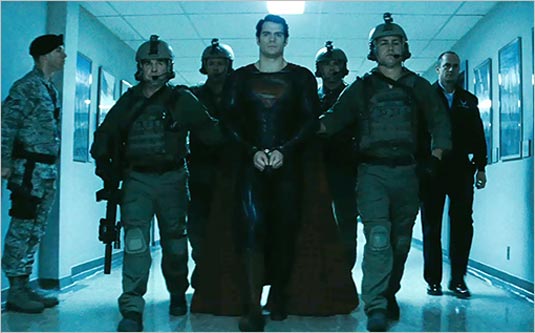 The MPAA (Motion Picture Association of America) has just released the latest batch of movie ratings and Zack Snyder‘s Man Of Steel is getting a PG-13 rating. It’s not much of a surprise really, most mainstream superhero movies get the PG-13 rating, each of Christopher Nolan‘s Batman movies, The Avengers, all got a PG-13 for mild violence and adult content. The MPAA posted their reasoning for the rating:

There had better be some INTENSE sci-fi violence in this movie, and some epic battle. Superman Returns suffered a lot because there wasn’t enough fighting  (that and the actor was completely unsuitable) – there was action, but without some actual fighting where we can see all those super-buffed, overpowering feats of his Kryptonian genetics – well, even I must say that Superman would be A BIT boring. The next Man of Steel news is another one of those infamous LEGO Set spoilers. Toy sets often spoil some details of their movie counterpart through packaging or pre-order forms and there’s no reason for Man of Steel to be an exception. The title of the box set gives us a peek at some of the characters involved in the movie, in this case a couple of new villain names:

We knew about Zod, but now the cat’s out of the bag about Tor-An and Faora, two more Kryptonians. Many are speculating about what kind of role each will play in the story, most figure them to be smaller, secondary villains to General Zod, it’s a good bet that they are going to be minions.

ComicBook.com is reporting an anonymous source that claims Tor-An will be played by actor and stuntman Richard Cetrone (Sucker Punch), along with another Kryptonian – Dev-Em, an escaped criminal played by Revard Dufresne (Sucker Punch).

The title of the set is what really caught my eye. “Battle of Smallville” leads me to believe that there will be a big fight in Superman’s home town during the movie. Remember that scene in the trailer where a space craft is hovering outside the Kent house? Could that be Zod and his minions come to play? Whatcha think?

Continue Reading
Advertisement
You may also like...
Related Topics:Man of Steel, Zack Snyder