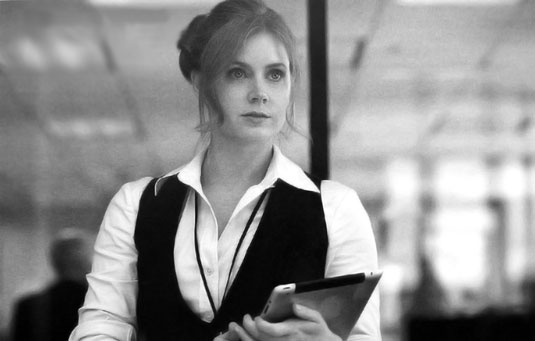 Details about Zack Snyder’s Man of Steel remain scarce, even now, with its release just four months away. We’ve heard that the film will feature a “more realistic” (whatever that means) take on the character and that Superman (Henry Cavill) will face off against General Zod (played by Michael Shannon). However, the Supe’s relationship with Lois Lane (Amy Adams) is as vague as it was when Adams was cast. Of course, the Man of Steel and The Daily Planet’s top (and slightly illiterate) reporter got married in the comics (before it was retconned for The New 52 and she was replaced by Wonder Woman), and in Bryan Singer’s Superman Returns, they even have a child. Regardless, Snyder will no doubt try to make the Superman mythology of his own with Man of Steel. Now, some new evidence surfaced, which gives us a hint in regard to which direction his film is headed. According to comicbook.com, a few props from the Man of Steel set have appeared on online auctions, and while most of the Lois Lane items include nonimportant items like pens, a pad and straws, it also includes one POTENTIAL SPOILER item: a faux diamond wedding ring. Of course, this asks the question of exactly how Lois’s marital status could influence the plot of Man of Steel. Perhaps Lois is in a relationship with someone other than Clark at the beginning of the film and becomes engaged during its running time. Then there’s always the chance that Superman and Lois attempt to take their relationship to the next level by the film’s end. In Superman Returns, Lois was engaged to Perry White’s nephew, Richard, so anything’s possible. It should be noted that Adams still hasn’t confirmed her involvement in a potential Man of Steel sequel, so until Man of Steel hits theaters, fans can only bust their heads on what the future holds for the son of Krypton. What do you think Snyder is planning for Lois Lane in Man of Steel? Let your opinion be known in the comments below. Man of Steel hits theaters on June 14th, 2013 and it also stars Russell Crowe, Diane Lane, Kevin Costner, Laurence Fishburne, Antje Traue and others. Oh and, here’s the poster that leaked online some time ago, in case you’ve missed it: