Connect with us
Principal photography has begun in New York City on the Summit Entertainment feature Man On A Ledge. 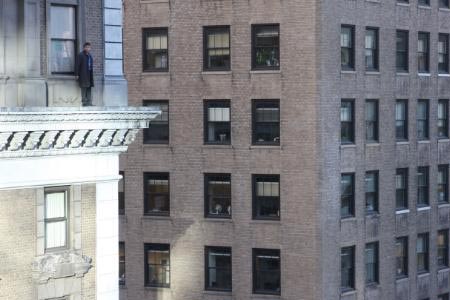 An ex-cop and now wanted fugitive (Sam Worthington) stands on the ledge of a high-rise building while a hard-living New York Police Department hostage negotiator (Elizabeth Banks) tries to talk him down. The longer they are on the ledge, the more she realizes that he might have an ulterior objective. Sam Worthington (Avatar) and Elizabeth Banks (The Next Three Days) star among an ensemble cast including Anthony Mackie (The Hurt Locker), who portrays Worthington’s best friend and ally and Jamie Bell ( Billy Elliot ) who is Worthington’s younger brother and ardent supporter. Also along for the ride is four-time Oscar® nominee, Ed Harris (Pollock) who plays a powerful businessman, while Edward Burns (27 Dresses) is a rival negotiator who tries to swoop in when he believes Banks has a conflict of interest. Newcomer Genesis Rodriguez (Casa di me Padre) plays Bell’s girlfriend who along with Bell, tries to prove Worthington’s innocence. Producer Lorenzo di Bonaventura stated,

“Man On A Ledge is an incredible suspense thriller with a powerhouse cast. I look forward to producing this project and once again working with Summit Entertainment with which we just released the action comedy RED.”

Man on a Ledge is directed by Asger Leth (Ghosts of Cite Solei l), from an original screenplay written by Pablo F. Fenjves (The Affair) and Erich Hoeber & Jon Hoeber, and is being produced by Lorenzo di Bonaventura and Mark Vahradian (Transformers & Transformers: Revenge of the Fallen). Executive Producers are David Ready (Red) and Jake Myers (Red). Paul Cameron (Man on Fire) is the Director of Photography and the Production Designer is Alec Hammond (Red). Kevin Stitt (X-Men) is the Editor and Susan Lyall (Red) serves as Costume Designer.
Continue Reading
Advertisement
You may also like...
Related Topics:Anthony Mackie, Ed Harris, Edward Burns, Elizabeth Banks, Lorenzo di Bonaventura, Man on a Ledge, Sam Worthington