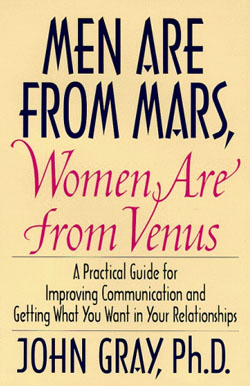 Summit Entertainment has picked up another popular title, and this time we’re here to talk about a book that was on the New York Times Bestseller List for nearly seven years and is #6 on USA Today’s list of the 25 Most Influential Books. Yeah, you already guess we’re talking about Men are from Mars, Women are from Venus so, as you see guys, if you’re up to some gender-differences kind of movies, there you go! Fresh and new project is coming… Summit Entertainment, the privately-held studio behind the blockbuster Twilight vampire movie franchise, said had acquired the worldwide film and television rights to the book series by John Gray, first published in 1992. This well-known series of books explore relationship issues on the basis of distinct gender differences. Maybe that’s exactly why they have sold more than 50 million copies in 45 nations worldwide to become one of the most popular relationship books ever. You can think whatever you want about Summit Entertainment and their projects, but one thing is for sure – they definitely know where the biggest success is. That’s why we’re not surprised to hear they already have “wider plans for the book series”. Erik Feig, the studio’s president of production said: “Men Are From Mars, Women Are From Venus is not just the title of a book, or what we know will become an amazing film and TV franchise – it is a pop cultural mainstay and comically, sadly, romantically, all too often still true these many years after first being published. We are thrilled to have the opportunity to work on a franchise whose name everyone knows and whose reality everyone lives!” Just to see how serious they are about the whole thing, they managed to get producers Gail Berman and Lloyd Braun, and they are here, of course, to develop the books into both a film and television franchise. Berman and Braun sounded exciting, since we had a chance to hear this kind of statement from them: “while men and women may never truly speak the same language, we’re thrilled to explore their perpetually hilarious, painful and romantic conflicts on the big screen”. So, at this moment, it’s too early to talk about directors, casting or possible release date, but we’re more than sure this kind of information will come soon. If you’re ready for another book adaptation then get ready for some gender-problems on the big screen. We’ll keep an eye on this one, so stay tuned!
Continue Reading
Advertisement
You may also like...
Related Topics:John Gray, Men Are From Mars Women Are From Venus