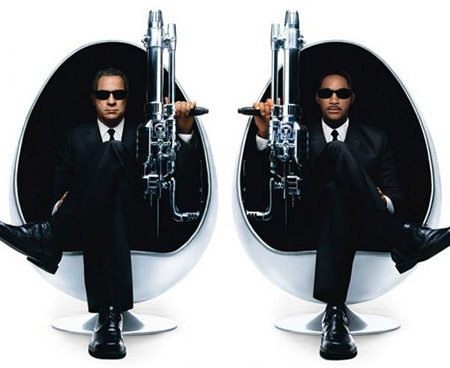 Men In Black 3 director Barry Sonnenfeld has confirmed Will Smith and Tommy Lee Jones‘ involvement in the new sequel. And, if you think that this is where the story ends, you are completely wrong, because this well-known filmmaker added that the movie will also be made in 3D and could be the big blockbuster release for May 2011 Memorial Day weekend. Well, not big surprise. Actually, if you think a little bit, this could be one of the movies that just needs to be in 3D, since we all know what kind of UFO conspiracy theory it represents, right? Men dressed in black suits who claim to be government agents who harass or threaten UFO witnesses to keep them quiet about what they have seen? Yep, that will definitely look better in 3D. Ok, at this moment no plot information guys, but it’s been said production will be fast tracked for a Summer 2011 release. So, we have the director Barry Sonnenfeld back, as well as stars Tommy Lee Jones and Will Smith. On the other hand, no word on the often rumoured Josh Brolin. Etan Cohen is in charge for the script. Until we get more information about this upcoming project, let us just remind you that the first Men in Black released in 1997 was made with a budget of $90 Million, and it earned $250 Million domestically. Sequel from 2002, or Men in Black 2 was made with a budget of $140 Million and earned a disappointing $190 Million domestically. We guess they know what they’re doing, but unfortunately, at this moment we can only imagine what kind of adventures Agent K. and Agent J. are going to have. If you like this news, than we’re more than sure you won’t forget to check upcoming updates about MIB 3, and until that happens, start singing “here come the Men in Black, the galaxy defenders” and get ready for this agents once again on a big screen. Stay tuned!
Continue Reading
Advertisement
You may also like...
Related Topics:Josh Brolin, Men In Black 3, Tommy Lee Jones, Will Smith