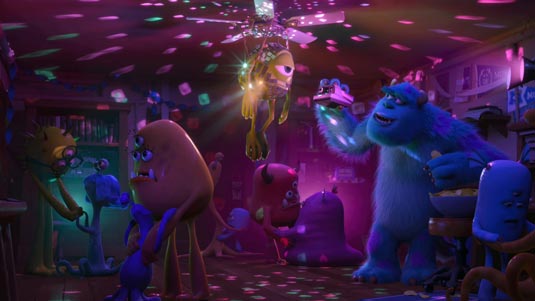 Pixar has released seven new character posters for their sequel to beloved animated feature, Monsters Inc. – Monsters University. These will introduce us to six of Monsters University’s Greek fraternities and sororities, which include the RURs, EEKs, HSS’s and the JOX. Oooh… I see what you did there. The seventh poster introduces the Greek Council’s President and Vice-President. Anyway, check them out:

If you happen to have noticed, only on the first one (with young Mike and James) are the individual pictures on the poster different from the group one; on the rest of them – they are merely copy/pasted from it. From what I’ve seen so far of their marketing campaign it looked like they really put an effort into it, which showed promise for the film, but this comes as a bit of a disappointment. Or maybe it’s just my perfectionist creature nagging from the inside. They do offer up new glimpses at a couple of returning characters, though, like Randall and George Sanderson, and aside from that maybe some fun can be had matching up the new characters to their voices. Billy Crystal, John Goodman and Steve Buscemi are returning to their respective roles, joined by Nathan Fillion, John Krasinski, Bonnie Hunt, Sean P. Hayes, Charlie Day, Aubrey Plaza, Alfred Molina and Helen Mirren. Monsters University arrives on June 21st, 2013 and is directed by Dan Scanlon. I know St. Patrick already passed, but it was too cute not to post it: