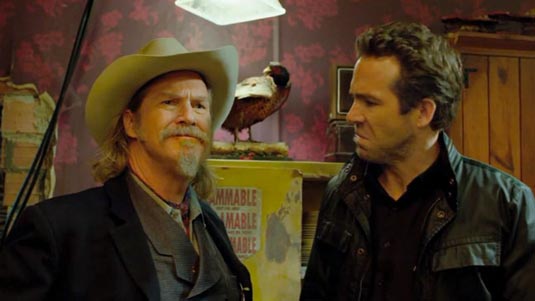 Yep, you’ve read it right – after that almost entirely black & white poster from two days ago, here comes the first trailer for another based-on-a-comic movie, R.I.P.D., as well – weird-packed, question-raising and guns-blazing, heheh. Have a look: The story follows a young, recently killed-in-action cop, who finds out that there’s a police department in afterlife, too. Or something like that – it’s called Rest in Peace Department (quaint!), in any case, and with help of his new, seasoned partner, he will try to find the sonofab*tch who murdered him. Directed by Robert Schwentke, R.I.P.D. is set to hit the theaters on July 19th, 2013 and it stars Ryan Reynolds, Jeff Bridges, Kevin Bacon, Stephanie Szostak, Mary-Louise Parker, Robert Knepper, Mike O’Malley and others.