MTV’s 2011 “Movie Awards” kept its tradition as Hollywood’s most atypical and irreverent awards show with surprise appearances, raunchy roasts, exclusive sneak peeks and even a few #laserboners. The LIVE telecast got off to a hilarious and celeb-studded start with host Jason Sudeikis spoofing “The Hangover Part II” as he gets drunk with Justin Bartha, loses Taylor Lautner, wakes up to a tattooed Eva Mendes sleeping in a bathtub and receives some tough love from the straight-shooting Chelsea Handler. Sudeikis then launches a no-holds-barred monologue in which no one and nothing is off limits — even himself — riffing on everything from Arnold Schwarzenegger to Justin Bieber to rumors the SNL star may soon be a “baby daddy.” 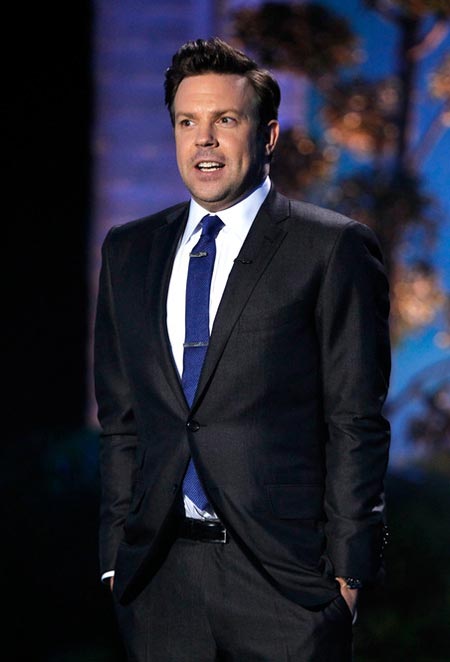 The fantastical set featured lush green landscapes, a glowing hillside and cascading crystals that turned the night into a psychedelic summer night’s dream. It was the perfect backdrop for MTV to give viewers “first looks” at some of the year’s most highly-anticipated movies, including exclusive footage from the super-secret “Super 8” presented by J.J. Abrams, Steven Spielberg, Elle Fanning and Joel Courtney; never-before-seen footage from “The Twilight Saga: Breaking Dawn-Part 1”; and a sneak peek clip from the concluding chapter of the most successful film franchise in movie history, “Harry Potter and the Deathly Hallows-Part 2,” introduced by the film’s leading actress Emma Stone.

Emma Stone became the second woman ever, after Reese Witherspoon, to win in the “BEST COMEDIC PERFORMANCE” category. Stone then took her humor from the silver screen to the stage when she joined Jason Sudeikis for a laugh-out-loud musical send-up that featured movie themed songs written by this year’s host and featuring Foo Fighters’ Dave Grohl on the gong.

This year’s show took the funny to a whole new level as Jim Carrey — the star who has won the most “Movie Awards” ever — introduced the Foo Fighters while wearing a business suit made of green screen that projected images of landscapes, cities, explosions…and even a couple of humping dogs. The Foo Fighters brought down the house as they took the stage for an electric performance of “Walk,” the second single off their chart-topping album Wasting Light. Switching gears from rock royalty to rap and R&B’s rising stars, critically-acclaimed hip-hop superstar Lupe Fiasco was joined by R&B sensation Trey Songz for their first-ever televised performance of the single “Out of My Head,” off Lupe’s #1 album LASERS, into Lupe’s performance of his platinum-hit song “The Show Goes On.”

Justin Bieber made a surprise appearance that caused the hearts of teen girls everywhere to beat double time, as he was awarded “BEST JAWDROPPING MOMENT.” Ryan Reynolds and Blake Lively from “Green Lantern” took the stage as “Jackass-3D” stars Steve-O, Chris Pontius and David England, along with “Twilight Saga” heartthrob Kellan Lutz, sported green #laserboners in the audience.

“The Twilight Saga: Eclipse” took home the most golden popcorns of any film for a total of five awards in the categories “BEST MOVIE,” “BEST FEMALE” and “BEST MALE PERFORMANCE,” “BEST KISS” and “BEST FIGHT.”

BEST LINE FROM A MOVIE: Alexys Nycole Sanchez, “Grown Ups”: “I want to get chocolate wasted.”