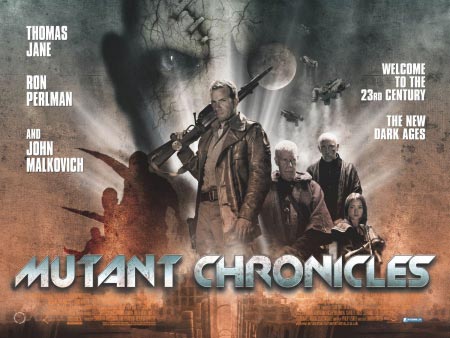 A brand new quad-sized poster for the upcoming film “The Mutant Chronicles,” starring Thomas Jane, John Malkovich and Ron Perlman, has been released, featuring a very heroic shot of Jane. “The Mutant Chronicles” is loosely based on the RPG, the story is set 400 years into the future (23rd or 24th century), where nearly everything is powered by steam, and mankind has exhausted Earth’s natural resources. Four corporations have taken over the world in which they are constantly at war with one another, the Bauhaus, the Mishima, the Capitol and the Imperial Corporations. “The Mutant Chronicles” is scheduled to be released December 11th 2008 (Russia), in US we don’t know yet.
Continue Reading
Advertisement
You may also like...
Related Topics:John Malkovich, Ron Perlman, thomas jane