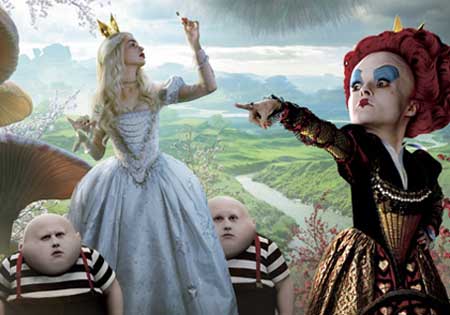 Walt Disney Pictures has released a new poster for “Alice in Wonderland” featuring Cheshire Cat (voiced by Stephen Fry), the Red Queen (Helena Bonham Carter), the White Queen (Anne Hathaway), and Tweedledee/Tweedledum (both played by Matt Lucas). This is the first in a series of three one sheets on the way. Next up will be the Caterpillar (Alan Rickman) and Mad Hatter (Johnny Depp), followed by a poster of Alice and the White Rabbit (Michael Sheen). 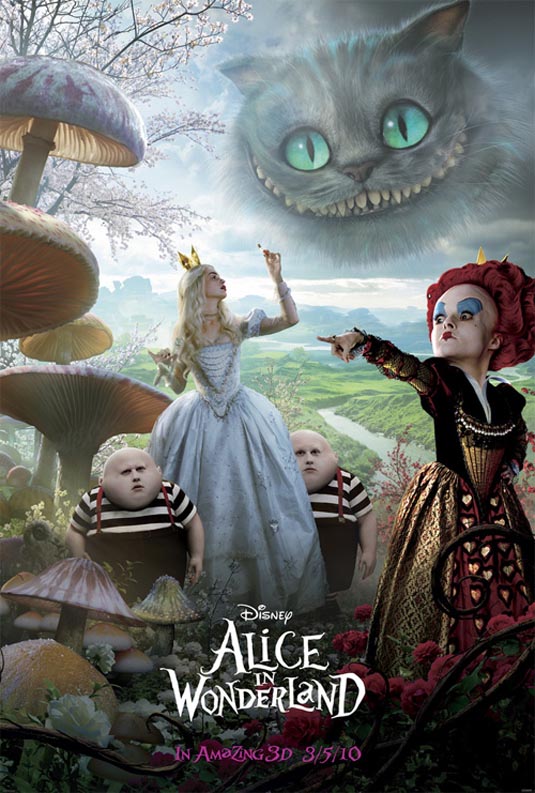 “Alice In Wonderland” Poster The story centers on the now-19-year-old Alice. Attending a party at a Victorian estate only to find she is about to be proposed to in front of hundreds of snooty society types, she runs after a white rabbit into a hole and ends up transferred once again to Wonderland. Still, she has no recollection of this place she visited 10 years before. The movie directed by Tim Burton from the script by Linda Woolverton which also stars Christopher Lee (Jabberwock) and Crispin Glover (The Knave of Hearts) is scheduled to hit theaters on March 5th, 2010 in both Disney Digital 3D as well as regular 2D.
Continue Reading
Advertisement
You may also like...
Related Topics:Alice In Wonderland, Anne Hathaway, Crispin Glover, Helena Bonham Carter, Johnny Depp, michael sheen, Tim Burton