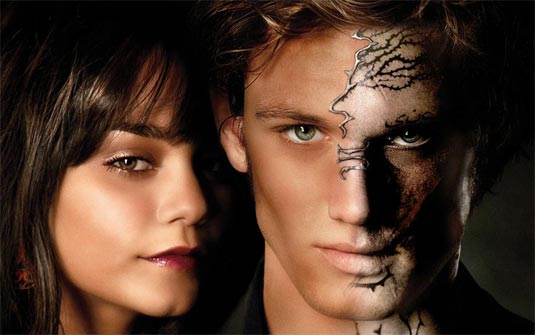 CBS Films has debuted a new poster for fantasy romance movie Beastly,which stars Vanessa Hudgens, Mary Kate Olsen and Alex Pettyfer. Beastly is a 2011 fantasy romance movie adapted from the 2007 Alex Flinn novel of the same name. Synopsis: A curse transforms a handsome and arrogant young man into everything he detests in this contemporary retelling of Beauty and the Beast. Wealthy Kyle Kingson (Alex Pettyfer) has everything a teenager could want in life, but he still gets off on humiliating the weaker and less attractive. When Kyle invites his misfit classmate Kendra (Mary-Kate Olsen) to an environmental rally at their school, she questions his motivations but reluctantly accepts. Later, Kyle blows Kendra off, prompting the spurned goth girl to cast a dark spell on the swaggering egotist. The spell causes Kyle to transform into an unsightly creature that strikes fear into the heart of everyone he meets, and the only way to reverse it is for him to find someone who can love him for who he is on the inside. Subsequently sent by his repulsed father (Peter Krause) to live in Brooklyn, Kyle forges a tenuous friendship with his kindly housekeeper (Lisa Gay Hamilton) and his blind tutor (Neil Patrick Harris). When Kyle witnesses a drug addict in a desperate struggle with a menacing dealer, he intervenes, promising to protect the addict under the condition that his beautiful daughter, Lindy (Vanessa Hudgens), comes to live with the unsightly recluse in his sprawling Brooklyn home. Over time, the two forge a relationship that grows much deeper than anything Kyle has ever experienced before. Beastly, directed by Daniel Barnz, hits theaters nationwide on March 18, 2011.