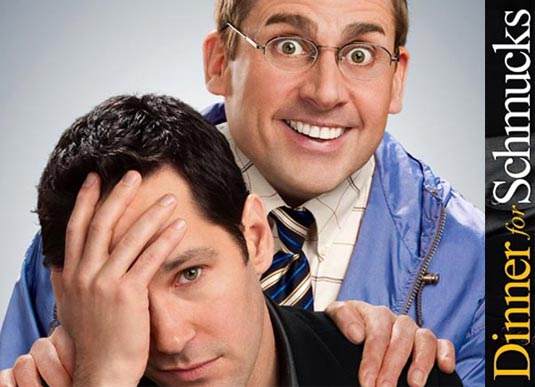 Empire has just premiered the second theatrical poster for the new summer comedy Dinner for Schmucks. The US remake of Francis Veber’s French comedy hit The Dinner Game (Le diner de cons) tells the story of Tim (Paul Rudd), a guy on the verge of having it all. The only thing standing between him and total career success is finding the perfect guest to bring to his boss’ annual Dinner for Extraordinary People, an event where the winner of the evening brings the most eccentric character as his guest. Enter Barry (Steve Carell), a guy with a passion for dressing mice up in tiny outfits to recreate great works of art. The film, directed by Jay Roach (Austin Powers, Meet the Parents), also stars Bruce Greenwood, Jemaine Clement, Zach Galifianakis, Lucy Punch, David Walliams and Ron Livingston. Dinner for Schmucks debuts in theaters this summer on July 23rd, 2010.