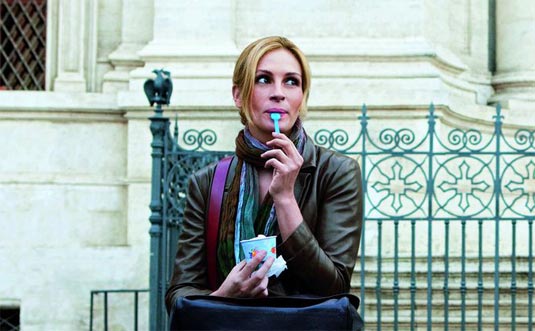 The new poster for Elizabeth Gilbert‘s best-selling memoir Eat, Pray, Love has released. For those not familiar with the book, the story follows a 32 year old woman (Julia Roberts) who was educated, had a home and a husband, and a successful career as a writer. However, she was not happy; she was depressed with her marriage, often spending the night crying on her bathroom floor. She divorced her husband and entered into a relationship with another man named David (James Franco), but this relationship did not work out either. She decided that she needed a change. She spent the next year traveling the world. She spent four months in Italy, eating and enjoying life (Eat). She spent four months in India, trying to find her spirituality (Pray). She ended the year in Bali, Indonesia, looking for “balance” of the two, and love (Love). Starring alongside Roberts and Franco is Javier Bardem and Billy Crudup. Eat, Pray Love is directed by Ryan Murphy (Running with Scissors) and  opens in theaters on August 13, 2010.