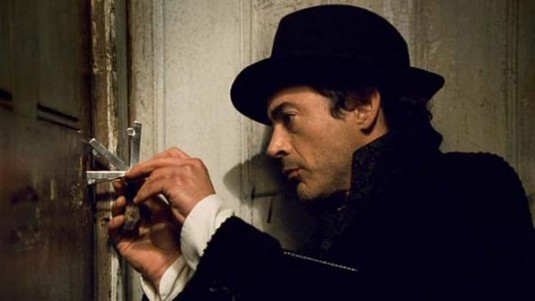 New trailer for the upcoming Guy Ritchie-directed “Sherlock Holmes” movie is online. Check it out below.

Set in 1891, the film revolves around Holmes and Watson as they try to stop a conspiracy that could destroy Britain, opening with Holmes apprehending cult leader ‘Lord Blackwood’ (Mark Strong), who promises he will return from the dead and exact his revenge, while being led to the gallows.

Ritchie is directing from the script by Michael Robert Johnson, Anthony Peckham and Simon Kinberg, based on an original story by Wigram incorporating Doyle’s public domain characters.

Guy Ritchie’s upcoming adaptation of Sherlock Holmes film already has sequel plans. Warner Bros is already moving forward with the sequel by hiring Kieran and Michele Mulroney (Justice League: Mortal) to write the script, with Brad Pitt in negotiations to come aboard. This will be the first time they have worked together since “Snatch.”

The first “Sherlock Holmes” movie will hit theaters on December 25, 2009.