Andrew Garfield in a library. Or, should I say – the amazing Spider-Man in a library? Whatever, the point is that we have a completely new image from the upcoming The Amazing Spider-Man movie, and we want to share it with you. It’s not like you’re going to see something spectacular, but I guess that some kind of weird action is actually hiding behind all those books… (yeah, right!). So, we already know that The Amazing Spider-Man is set to open this summer, and they also promise us that this will be the first in a series of movies that will tell a different side of the Peter Parker story. But, what’s actually different about it? I have no idea, the only thing I know is that we’ll have a chance to watch Peter as he’s trying to figure out who he is and how he got to be the person he is today. And then, as usual, in his journey to put the pieces of his past together he uncovers a secret his father held…a secret that will ultimately shape his destiny as Spider-Man. The movie comes from director Marc Webb and stars Andrew Garfield, Emma Stone, Rhys Ifans, Denis Leary, Campbell Scott, Irrfan Khan, Martin Sheen and Sally Field. The Amazing Spider-Man opens on July 3, 2012. 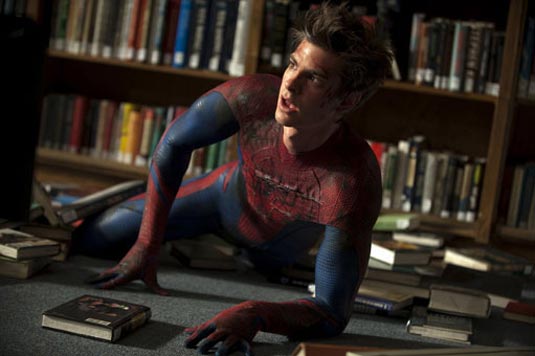