After sharing those cool character posters for the upcoming The Expendables 2 movie, we’re here to update our little gallery with a completely new image from the whole thing. It’s not some spectacular photo, but at least you’re going to see another capture of Yu Nan as Maggie, Terry Crews as Hale Caesar, Randy Couture as Toll Road, Dolph Lundgren as Gunnar Jensen and of course Sylvester Stallone as Barney Ross. Check it out. As you already know, Simon West‘s The Expendables sequel is set to open this August, and the rest of the cast also includes Jason Statham, Yin Yang, Liam Hemsworth and Bruce Willis. They all make the Expendables team and are compelled to seek revenge in hostile territory where the odds are stacked against them. The crew cuts a swath of destruction through opposing forces, wreaking havoc and shutting down an unexpected threat in the nick of time – six pounds of weapons-grade plutonium; enough to change the balance of power in the world. But that’s nothing compared to the justice they serve against the villainous adversary who savagely murdered their brother. The Expendables 2 opens on August 17th, 2012. 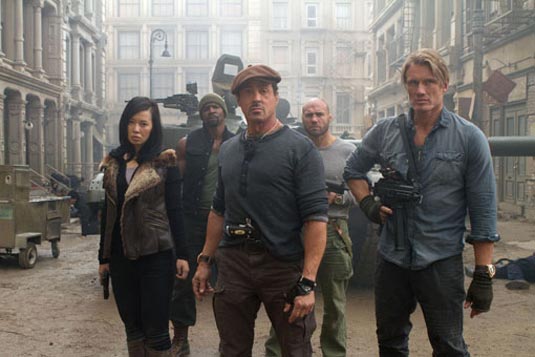