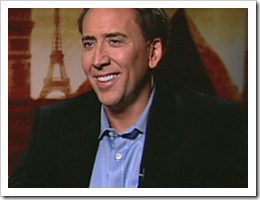 BEVERLY HILLS, California — Silver Surfer has been seen hangin’ 10 with the Fantastic Four. “Justice League of America” is currently organizing a block party with Superman, Batman, Wonder Woman and others. In May, “Iron Man” will take time out of his busy schedule to do a fast scene with Nick Fury. And now Ghost Rider wants in on the action. “I would love to have Ghost Rider drive onto a ‘Spider-Man’ set; that would be fun,” Nicolas Cage told us over the weekend, insisting that he’s eager to contribute to the cross-pollination of movie superheroes that has become all the rage. “A Marvel team-up? That could happen.” In February, the A-List Oscar winner stepped into the biker boots and flaming skull of Marvel Comics’ super dark superhero, riding his Hell Cycle all the way to a $52 million opening weekend. Talk of a sequel has surrounded the franchise ever since, and Cage insists that a second movie would free the filmmakers from the chains that left some disappointed in the first flick. “I would love to do another Ghost Rider,” he said of the character. “I’d make him really dark. Way dark.” Earlier this year, producer Avi Arad announced plans for “Ghost Rider II” as he stood alongside director Mark Steven Johnson, who’d likely return. Arad has also confirmed plans for additional “Spider-Man” films. Speaking on the classic character he loves so much that he bears a flaming-skull tattoo on his arm, Cage added: “We’re done with the whole back story now; he should come back, but this time he should come back drinking.” In the first film, Johnny Blaze sidestepped alcohol while explaining that it “gave him nightmares,” preferring jelly beans as his vice. In a sequel, Cage would play off that line to show just how far Johnny has fallen since his deal with Mephistopheles (Peter Fonda). “Now the demon has taken over,” he insisted. “He’s not eating jelly beans anymore; he’s getting drunk, and we’ll see what happens there.” As for villains, Cage said that rather than looking for ideas by leafing through the hundreds of “Ghost Rider” comics he keeps in an upstairs room, he’d prefer that the Marvel team create a new bad guy. “I think it would be good to invent some new villains,” he said. “A lot of the villains that were created for Ghost Rider ended up in the Batman sequels — Scarecrow and all that. So, I think we should build something from scratch.” Until the time comes that Cage can find what he calls “a script that works,” the avowed comic s nut will continue to follow the other superhero franchises closely. Excited by the upcoming “Justice League” movie and news that Samuel L. Jackson (and Hilary Swank) will introduce new heroes in “Iron Man,” Cage is keeping a flaming eye on a possible crossover of his own. “If they put Ghost Rider in a team-up with Spider-Man, that’d be hilarious,” Cage grinned, thinking back to the many times the two unlikely allies have met in the comics. “I would love that.” [youtube]http://www.youtube.com/watch?v=qNhKSJH-yJA[/youtube]
Continue Reading
Advertisement
You may also like...
Related Topics:Ghost Rider, Nicolas Cage