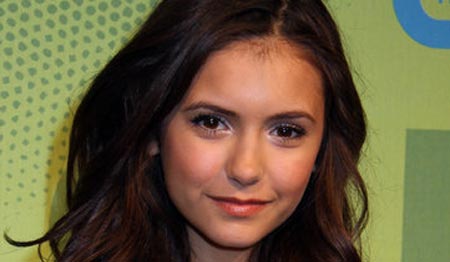 Stephen Chbosky’s adaptation of his novel The Perks of Being a Wallflower is coming, and we’re here to report that the cast of this one is getting bigger (and prettier by the way!). The cast already includes Emma Watson, Logan Lerman and Mae Whitman, but according to the latest reports, Nina Dobrev, who you probably remember from The CW’s The Vampire Diaries has joined the cast as well!

Dobrev is set to star as character named Candace in a story “about 15-year-old Charlie (Logan Lerman), an endearing and naive outsider, coping with first love (Emma Watson), the suicide of his best friend, and his own mental illness while struggling to find a group of people with whom he belongs.”

Whitman is set to star as Mary Elizabeth, character described as “a tattooed vegetarian who acts as the protagonist’s first girlfriend.”

On the other hand, there are some rumors that Paul Rudd is also set to appear in this project, although they doesn’t specify which role he will play.

Here’s the synopsis part once again: “Charlie, the wallflower of the title, goes through a veritable bath of bathos in his 10th grade year, 1991. The novel is formatted as a series of letters to an unnamed “friend,” the first of which reveals the suicide of Charlie’s pal Michael. Charlie’s response – valid enough – is to cry. The crying soon gets out of hand, though – in subsequent letters, his father, his aunt, his sister and his sister’s boyfriend all become lachrymose.

Charlie has the usual dire adolescent problems – sex, drugs, the thuggish football team – and they perplex him in the usual teen TV ways. Into these standard teenage issues Chbosky infuses a droning insistence on Charlie’s supersensitive disposition. Charlie’s English teacher and others have a disconcerting tendency to rhapsodize over Charlie’s giftedness, which seems to consist of Charlie’s unquestioning assimilation of the teacher’s taste in books. In the end we learn the root of Charlie’s psychological problems, and we confront, with him, the coming rigors of 11th grade, ever hopeful that he’ll find a suitable girlfriend and increase his vocabulary”.

Filming on The Perks of Being a Wallflower starts next month in Pittsburgh.

Continue Reading
Advertisement
You may also like...
Related Topics:Emma Watson, mae whitman, Nina Dobrev, Paul Rudd, The Perks of Being a Wallflower

Ryan Gosling to Join Johnny Depp in The Lone Ranger?
Jason Statham in Talks to Star in the Taylor Hackford’s Thriller Parker
Advertisement