Connect with us
Yeah, her name is familiar to all of us. Noomi Rapace is a girl who played the title character Lisbeth Salander, in the 2009 Swedish film based on the award-winning crime novel by Stieg Larsson, The Girl with the Dragon Tattoo (Män som hatar kvinnor). 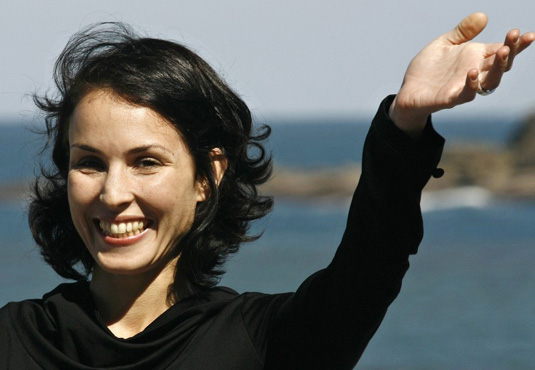 Noomi Rapace And yes, some of us actually thought she could be the perfect Lisbeth for David Fincher‘s upcoming English version of this story. Ok, that’s not going to happen, since it’s already confirmed that Rooney Mara is next troubled-brilliant hacker, but that doesn’t mean Rapace is out of question when it comes to Hollywood, because it looks that she’s here to stay! Noomi Rapace arrived in Los Angeles during the weekend where she met filmmakers McG, Joe Roth, Brett Ratner and Ridley Scott, as well as various producers, like Avi Arad and Lorenzo Di Bonaventura. Smart choice for this 30-years old actress indeed! She took herself out of the running for the remake, deciding to broaden her portfolio by breaking into the American film scene in a new role. According to Deadline, Greg Silverman wants her for Sherlock Holmes 2, and Marc Evans approaches her for Mission: Impossible IV. Details of the roles are not mentioned, but Rapace is expected to be back to Hollywood next week to meet again with Silverman and Mission: Impossible IV director Brad Bird. Rapace could join the cast of other projects slike Brad Fischer’s The Last Voyage of the Demeter, Jon Amiel’s next reportedly titled Masterwork, James McTeigue’s The Raven, Tommy Wirkola’s Hansel and Gretel: Witch Hunters, and McG’s This Means War. It’s interesting that for McG’s romantic comedy Rapace is offered a villain role. Nothing is official, of course, but we’ll wait for some great news and good role for Noomi Rapace. And we definitely have no doubt in her talent! She received not only an international acclaim for her performance, but earned herself a Best Actress Guldbagge (the Swedish equivalent of the Oscar) for her performance in The Girl With the Dragon Tattoo as well. Good luck Rapace!
Continue Reading
Advertisement
You may also like...
Related Topics:Brad Bird, Brett Ratner, David Fincher, James McTeigue, McG, Ridley Scott, Rooney Mara, Sherlock Holmes: A Game Of Shadows, The Girl With The Dragon Tattoo, This Means War