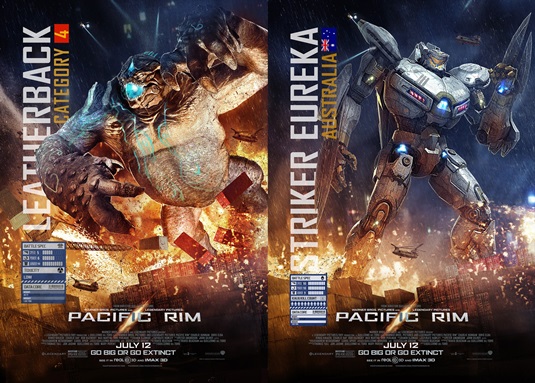 With a massive ad campaign that Pacific Rim has already launched, its latest blitzkrieg continues with new posters and two new international TV spots for Guillermo del Toro’s upcoming action-adventure movie. Pacific Rim blockbuster will soon hit 3D, IMAX 3D and 2D theaters. We already learned that Kaiju is Japanese for ‘giant monsters’ and these giant alien monsters are intent on destruction – San Francisco is first to go, then Manila. On the other side, Jaegers – robots that match the size of the monsters – take on the Kaiju and make a pretty good fist of it, but the Kaiju keep coming, so mankind is ‘losing Jaegers faster than we can make them,’ says the voiceover. There is only ‘one last chance.’ Head inside to take another look at the ‘giant robots vs giant monsters’ movie. Starring Charlie Hunnam as Raleigh Antrobus, Idris Elba as General Stacker Pentecost, Rinko Kikuchi as Mako Mori, Charlie Day as Newt Gotlieb, Ron Perlman as Hannibal Chow, Clifton Collins Jr. as Tendo Choi, Max Martini as Herc Hansen and Robert Kazinsky as Yancy Antrobus, Pacific Rim opens on July 12th, 2013.