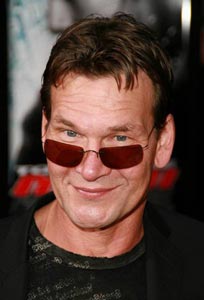 Good news for A&E Network and Patrick Swayze, they have picked up “The Beast.” Patrick Swayze, who was diagnosed with pancreatic cancer in March, is set to star in the series alongside Travis Fimmel. In his first TV role, Swayze will portray an unconventional FBI agent and mentor to a “newcomer’ agent portrayed by Travis Fimmel. There is no change in the script, according to Zack Van Amburg, co-President of Sony’s television studio, because they felt they must be true to the story, which is amazing news for fans who have been drawn to this because of Swayze. A&E has ordered 13 hour-long episodes to go into production this summer in Chicago, with a tentative premiere set for early 2009. In a statement, Swayze did not address his health, but network execs confirmed that his doctors have cleared him to resume work. Swayze said :

“I have searched for quite a long time to find a character that is this multilayered, unpredictable and downright entertaining as well as a project this current and cutting-edged”.