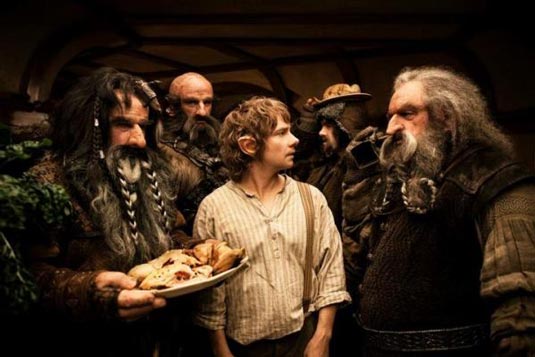 A couple of days ago I wrote about director Peter Jackson‘s efforts to put The Hobbit into a trilogy, after all. Well, it is confirmed – just a few minutes ago, I’ve seen the official announcement from New Line Cinema, Metro-Goldwyn-Mayer Studios, and Warner Bros. Pictures on film’s official Facebook page. Hit the jump to read it:

BURBANK, CA, JULY 30, 2012 — Peter Jackson will make a third film in his upcoming adaptation of J.R.R. Tolkien’s enduringly popular masterpiece The Hobbit, it was jointly announced today by Toby Emmerich, President and Chief Operating Officer, New Line Cinema, Gary Barber and Roger Birnbaum, Co-Chairman and Chief Executive Officers, Metro-Goldwyn-Mayer Studios, and Jeff Robinov, President, Warner Bros. Pictures Group. Jackson, the Academy Award®-winning filmmaker behind the blockbuster “The Lord of the Rings” Trilogy, recently wrapped principal photography on what he originally planned to be a two-film adaptation of The Hobbit, which is set in Middle-earth 60 years before The Lord of the Rings. Jackson stated, “Upon recently viewing a cut of the first film, and a chunk of the second, Fran Walsh, Philippa Boyens and I were very pleased with the way the story was coming together. We recognized that the richness of the story of The Hobbit, as well as some of the related material in the appendices of The Lord of the Rings, gave rise to a simple question: do we tell more of the tale? And the answer from our perspective as filmmakers and fans was an unreserved ‘yes.’ We know the strength of our cast and of the characters they have brought to life.  We know creatively how compelling and engaging the story can be and—lastly, and most importantly—we know how much of the tale of Bilbo Baggins, the Dwarves of Erebor, the rise of the Necromancer, and the Battle of Dol Guldur would remain untold if we did not fully realize this complex and wonderful adventure. I’m delighted that New Line, MGM and Warner Bros. are equally enthusiastic about bringing fans this expansive tale across three films.” Emmerich stated, “We completely support Peter and his vision for bringing this grand adventure to the screen over the course of three films. Peter, Fran and Philippa’s reverence for the material and understanding of these characters ensure an exciting and expanded journey that is bound to please fans around the world.” “With the abundance of rich material, we fully endorse the decision to further develop what Peter, Fran and Philippa have already begun. We are confident that, with the great care the filmmakers have taken to faithfully bring this journey to the screen, the film will be welcomed by the legions of fans across the globe,” said Barber and Birnbaum. Robinov added, “Peter, Fran and Philippa have lived in this world and understand more than anyone its tremendous breadth and scope, and the relationships that bind it together.  We strongly support their vision to bring this great work fully to life.” The first film in the trilogy, “The Hobbit: An Unexpected Journey,” will be released December 14, 2012, with the second film releasing on December 13, 2013, and the third film slated for summer 2014. All three films will be released in 3D and 2D in select theatres and IMAX. From Academy Award®-winning filmmaker Peter Jackson comes three films based on The Hobbit by J.R.R. Tolkien. The trilogy of films are set in Middle-earth 60 years before “The Lord of the Rings,” which Jackson and his filmmaking team brought to the big screen in the blockbuster trilogy that culminated with the Oscar®-winning “The Lord of the Rings: The Return of the King.” Ian McKellen returns as Gandalf the Grey, the character he played in “The Lord of the Rings” Trilogy, with Martin Freeman in the central role of Bilbo Baggins, and Richard Armitage as Thorin Oakenshield.  Returning cast members from “The Lord of the Rings” Trilogy also include Cate Blanchett, Orlando Bloom, Ian Holm, Christopher Lee, Hugo Weaving, Elijah Wood, and Andy Serkis as “Gollum.”  The international ensemble cast also includes (in alphabetical order) John Bell, Jed Brophy, Adam Brown, John Callen, Billy Connolly, Luke Evans, Stephen Fry, Ryan Gage, Mark Hadlow, Peter Hambleton, Barry Humphries, Stephen Hunter, William Kircher, Evangeline Lilly, Sylvester McCoy, Bret McKenzie, Graham McTavish, Mike Mizrahi, James Nesbitt, Dean O’Gorman, Lee Pace, Mikael Persbrandt, Conan Stevens, Ken Stott, Jeffrey Thomas, and Aidan Turner. The screenplay for “The Hobbit: An Unexpected Journey” is by Fran Walsh & Philippa Boyens & Peter Jackson & Guillermo del Toro.  Jackson is also producing the film, together with Carolynne Cunningham, Zane Weiner and Fran Walsh. The executive producers are Alan Horn, Toby Emmerich, Ken Kamins and Carolyn Blackwood, with Boyens and Eileen Moran serving as co-producers. Under Jackson’s direction, all three movies are being shot in digital 3D using the latest camera and stereo technology. Additional filming, as with principal photography, is taking place at Stone Street Studios, Wellington, and on location around New Zealand. “The Hobbit: An Unexpected Journey” and its successive installments are productions of New Line Cinema and MGM, with New Line managing production. Warner Bros. Pictures is handling worldwide theatrical distribution, with select international territories as well as all international television licensing, being handled by MGM.

Hooray! This is really what I was hoping for, in spite some barbed comments that he’s doing that only for money – ok, money sure is a factor, but seeing as the man is a fan of Tolkien’s as well as fans who loved LotR – come on, people, can’t someone do something out of LOVE and paying respect?