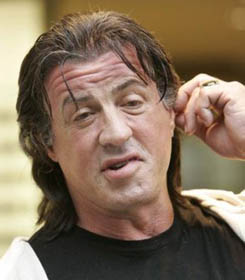 Sylvester Stallone revealed in interview for Swedish newspaper Metro, that he is planning on continuing the “Rambo” franchise. His plan is to get away from the violence of the films and possibly let the character be a part of a different genre. “I would like to take Rambo to another genre, experiment a little with the character,” said Stallone. “It would definitely not be another war movie. I can’t go any further with that than what I’ve already done. What it’s going to be like, I’m not going to reveal at this point. But I’m already halfway though writing the manuscript.”
Continue Reading
Advertisement
You may also like...
Related Topics:Sylvester Stallone

Return Of The ‘Robocop’
Gemma Arterton In BBC Drama
Advertisement