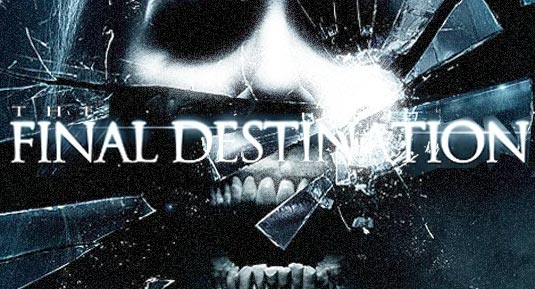 Checkout the really cool animated poster for “The Final Destination” (Final Destination 4) below. Warner Brothers Entertainment aimed to bring viewers to complete visual meltdown with the release of the movie “Final Destination 4,” so they partnered with Virtual Images — The 3-D Company, to promote it. The creative team at Virtual Images, consisting of 3-D artists and 3-D designers, worked with the studio to create visually stunning art that depicts a human skull and shards of glass jumping out of the piece toward the viewer. The 4th installment in the popular Final Destination film series is receiving hype surrounding the self-exacted slogan, “Death Saved the Best for 3D,” and the 3-D movie posters produced to promote the movie fit that bill. The Final Destination (2009) synopsis: On what should have been a fun-filled day at the races, Nick O’Bannon (Bobby Campo) has a horrific premonition in which a bizarre sequence of events causes multiple race cars to crash, sending flaming debris into the stands, brutally killing his friends and causing the upper deck of the stands to collapse on him. When he comes out of this grisly nightmare Nick panics, persuading his girlfriend, Lori (Shantel VanSanten), and their friends, Janet (Haley Webb) and Hunt (Nick Zano), to leave… escaping seconds before Nick’s frightening vision becomes a terrible reality. Thinking they’ve cheated death, the group has a new lease on life, but unfortunately for Nick and Lori, it is only the beginning. As his premonitions continue and the crash survivors begin to die one-by-one–in increasingly gruesome ways–Nick must figure out how to cheat death once and for all before he, too, reaches his final destination.