RED STATE unfolds in a small town dominated by a fundamentalist preacher, Abin Cooper. It tells the story of three high school boys who, on their way to an internet arranged meeting with a woman, end up crossing paths with Cooper. The encounter sets into motion a series of events that causes all hell to break loose. A horror thriller that could only come from the imagination of Smith, RED STATE stars Tarantino and Rodriguez favorite Michael Parks (“From Dusk Till Dawn”, “Kill Bill Vols. 1 & 2″), Oscar Nominee for Best Actress Melissa Leo (“The Fighter,” “Frozen River”) and John Goodman, Michael Angarano, Kyle Gallner and Nicholas Braun. 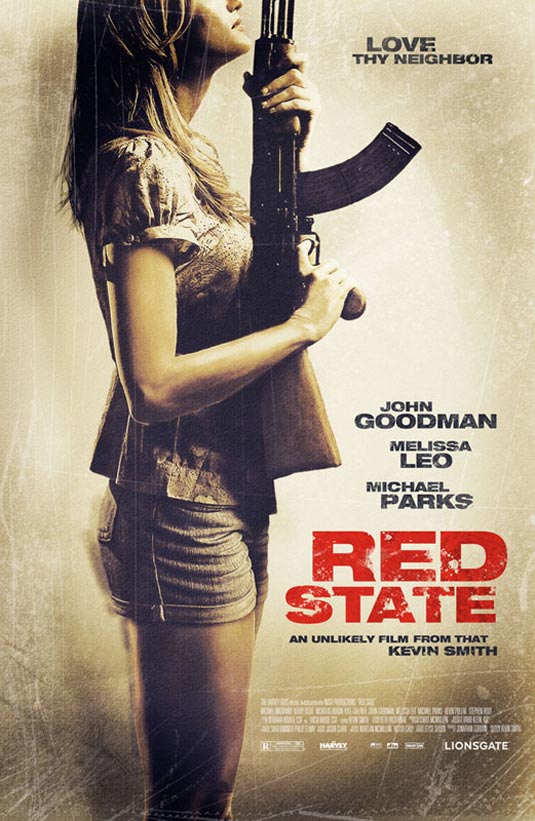 Written and directed by Kevin Smith and produced by Jonathan Gordon, RED STATE stars 2011 Academy Award® winner for Best Actress Melissa Leo and Emmy® winner John Goodman, plus Kyle Gallner and Michael Parks. The film debuted at this year’s Sundance Film Festival to much notoriety when Smith ended studio bidding by buying his own film for $20 and declaring he would be self-distributing the film theatrically. Smith has since toured the film around the country to enthusiastic audiences, grossing close to $1 million to date at the US box office from only 15 single show engagements. SModcast spent less than $500 in paid advertising to support the tour which kicked off at Radio City Music Hall on March 5th and grossed $162,000 during one show. It quietly topped the per screen average charts for three weekends, becoming the 10th best per screen average film of all time. The movie is also getting an Oscar-qualifying run at the New Beverly in Los Angeles for a week starting on Aug. 19. Lionsgate will open Red State wider on October 19, 2011. Below we have a new full trailer for the film, which has far more footage than the teaser, and shows the mayhem and a bit of black humor in action.
Continue Reading
Advertisement
You may also like...
Related Topics:Dermot Mulroney, John Goodman, Kevin Smith, Kyle Gallner, Melissa Leo, Michael Angarano, Michael Parks, Red State, Stephen Root